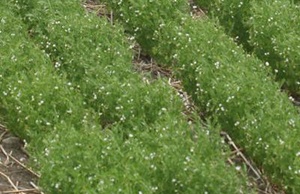 The application of extended photoperiod is a simple method that allows accelerating plant growth and development. Genetic improvement is one of the main applications of this technique. We tested this method in lentil by comparing an extended photoperiod treatment of 22 h light at 25-28 °C and 2 h dark at 12-18 °C in a growth chamber and a conventional control treatment under a glasshouse of 10 h/14 h to 12 h/12 h day/night photoperiod and 15°C to 32°C minimum and maximum temperature during the experiment period. Statistically different results were obtained for the two treatments. Promising results were obtained for segregating genetic material (F2 populations) derived from crosses. In fact, we were able to get 3-4 generations a year using a single seed descent method under the extended photoperiod treatment instead of one single generation under the control treatment. Lower number of days to maturity and higher average growth rate for F2 lines were obtained for the extended photoperiod method compared to the glasshouse-based conventional method with 84 and 172; 0.68 and 0.33 cm/day, respectively. Likewise, for wild accessions of L. orientalis, number of days to maturity was 115 and 225 for the extended photoperiod method and the glasshouse-based conventional method, respectively. Slight plant mortality and reduced seed viability were observed. This could be fixed through light characteristics optimization. The obtained results highlight the potential of this method to speed breeding and pre-breeding in lentil. The use of this simple but efficient technique in breeding programs is important for rapid development of high yielding, biotic and abiotic stresses resistant and climate change resilient varieties.

Lentil (Lens culinaris Medik.) is an important food legume crop worldwide. Lentil grains, largely consumed as staple food in Morocco and other developing countries, are rich in proteins, iron, zinc, dietary fibers and other minerals and vitamins. Furthermore, it contributes to sustainable farming by reducing the needs for fertilizer application thanks to its ability to fix nitrogen in soils. Despite these properties, several constraints limit lentil production. Breeding programs aiming at developing high-yielding and (a)biotic stress-resistant varieties could contribute to increase its yield and production and enhance food security. However, conventional breeding techniques require long periods to develop improved varieties. Thus, there is an urgent need for using techniques that could reduce generation time and accelerate breeding in the perspective of developing improved varieties in a shorter period. Among these techniques, the extended photoperiod was reported as a speed breeding powerful tool to accelerate breeding (Watson et al., 2018; Ghosh et al., 2018). These authors used prolonged photoperiods, based on a mixture of metal halide and light-emitting diode (LED) lighting, to reduce generation time by accelerating the developmental rate of plants and the harvesting and germination of immature seeds in wheat, barley, pea, chickpea and canola. By exposing plants to 22 h light, they could obtain up to 6 generation per year. Earlier, Sethi et al., (1981) could harvest chickpea plants 62 days earlier with 24 h day length (Sethi et al., 1981). Successful use of prolonged photoperiod has been reported for other crop species (Sysoeva et al., 2010; Pazos-Navarro et al., 2017; Crosser et al., 2016). To our knowledge, only few results were reported for lentil (Mobini et al., 2016; Idrissi and Van Damme 2018; Idrissi et al., 2019). Thus, the objective of this research paper is to test the application of extended photoperiod in lentil in the perspective of its use for breeding and pre-breeding purposes. Segregating genetic material, landraces and wild accessions of Lens orientalis were used.

We used a simple technique based on the application of an extended photoperiod treatment as described by Watson et al., (2018) to achieve several generations per year instead of one generation which is the rule in the greenhouse-based conventional breeding (control treatment: 10 h/14 h to 12 h/12 h day/night photoperiod and 15°C to 32°C minimum and maximum temperature during the experiment period) in lentil, a long-day period plant. In a growth chamber (Ehret KBK/LS 4600) with fluorescent lamps (number/power: 10/30w, Osram type 10/L30W25) (Figure 1), an extended photoperiod treatment of 22h light at 25 °C and 2h dark at 12-18 °C was applied to cross derived F2 lines, local populations from the Moroccan lentil improvement program and wild accessions of Lens orientalis. At first pod formation, temperature was increased to 28 °C.

Pods were harvested at physiological maturity and oven-dried at 35°C for 2 days. Seeds obtained from the segregating genetic material (F3 seeds) were planted in the growth chamber under the extended photoperiod treatment to obtain F4 seeds during the same season.

The genetic material used was composed of:

• An F2 population of 280 individuals from a single cross between an elite line with rust resistant (F00-24) and an adapted Moroccan landrace (MGB1027).

Plant ramification started at 14 and 30 days after sowing for the extended photoperiod growth chamber-based and the conventional glasshouse-based breeding methods, respectively (Figure 3).

For the reproductive stages, shorter periods were obtained for the speed breeding method. In fact, the extended photoperiod resulted in shorter plant growth and development cycles in terms of days to first flower, days to first pod, days to physiological maturity and pod filling period compared to the conventional breeding method (Figure 4). Pods were harvested at 91 days after sowing under the extended photoperiod breeding method, while they were harvested at 168 days after sowing under the conventional glasshouse-based breeding method. This corresponded to a reduction of about 46 % due to the extended photoperiod method. Likewise, the number of days to first flower and the number of days to physiological maturity were reduced by 55 % and 46 %, respectively (Figures 4 and 5). The harvested pods carried F3 seeds generation that were immediately planted to produce F4 seeds during the same season, thus achieving 3 generations per year instead of 1 for the glasshouse-based breeding method.

An F2 population of 280 individuals from a single cross between an elite line with rust resistance (F00-24) and an adapted Moroccan landrace (MGB1027) was grown at high density under the extended photoperiod in the growth chamber as described above. The population was advanced using single seed descent (SSD) method (Figure 6). The extended photoperiod treatment accelerated the generation turnover. In fact, up to 4 generations per year instead of only one under the conventional system were achieved. After F6 generation, first selection tests will start and afterwards selected lines will go through comparative yield trials to identify promising lines for variety development. The application of extended photoperiod in breeding is particularly adapted to the use of SSD method as only one seed from each genotype will allow generation advancing aiming at trait fixation. Furthermore, this protocol is useful for rapid generation of recombinant inbred line populations (RILs) as mapping populations for genetic and molecular studies.

For wild accessions of L. orientalis, the extended photoperiod protocol was found to be very useful because late flowering in this species is common, making their use for pre-breeding difficult (Figure 7).

The protocol of extended light period we applied on lentil enhanced plant growth and accelerated flowering and maturity was reported by Watson et al., (2018) and Ghosh et al., (2018) for other plants. However, only 3 to 4 generations per year could be obtained following our experiment compared to up to 6 generations reported by these authors for different plant species. Our findings were in agreement with the results indicating faster in vitro development and flowering reported by Mobini et al., (2016) for lentil. These authors used different kinds of lighting sources, namely light emitting diodes (LED; R:FR = 3.09), T5 fluorescent bulbs (R:FR = 5.6) and T5 supplemented with near far-red bulbs. Lentil plants flowered earlier under the protocol we used compared to the three treatments tested by Mobini et al., (2016).

The obtained results indicated the potential importance of applying this simple but efficient protocol of extended light period to speed breeding and variety release in lentil. It could be used for rapid generation turnover (F2 to F6) of genetic material obtain from crossing blocks as well as for shortening flowering time of wild species, especially Lens orientalis known for its late flowering for efficient use in crossing. However, it should be pointed out that the protocol needs further optimization regarding light characteristics, for instance light intensity, spectral composition (light emitting diodes LED, red, blue light…) and red/far-red light ratio. The optimization would result in reduced plant mortality, higher flowering rate and higher seed viability in order to limit the loss of potentially important genetic diversity during the process of generation advancing under the extended photoperiod.