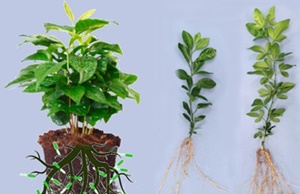 Citrus is one of the largest fruit crops grown in Morocco. Citrus crops gain in importance due to the jobs generated during the production process of fresh or processed fruit. Intensive agriculture is characterized by the excessive use of inorganic fertilizers and pesticides. This production system has generated serious environmental contamination problems, thus, it is necessary to implement sustainable production strategies to reduce the use of synthetic chemicals and contribute to soil and water conservation. In this context, Seventy two Rhizobacterial isolates of fluorescent Pseudomonas were isolated from rhizosphere soil of Citrus in the Sapiama nursery. These isolates were tested on germination and growth of Citrus macrophylla rootstock. The results obtained showed that the isolate C11 significantly stimulated germination 16 days after seed inoculation. The C26, C6 and C24 isolates showed PGPR effects improving significantly the growth parameters of C. macrophylla rootstock. They significantly promoted plant height, collar diameter and root length. This study concluded that the Pseudomonas isolates could be potential alternative biofertilizers to chemical products and could be considered as a promising main component for sustainable agriculture development strategy in Citrus farming.

Citrus is one of the most important fruit crops grown in Morocco. It represents an important element in the economy of the country, with an annual production of 1.5 to 2.0 million tons obtained from approximately 125,000 ha (ASPAM, 2019). Souss-Massa-Draa region is the main area of both production and exportation of fresh fruit from Morocco (Boubaker et al., 2009). Given the economic importance of Citrus crops, producers became more and more dependent on agrochemicals as a reliable method to maintain soil productivity and thus to accelerate and improve Citrus production. However, the use of fungicides is increasingly becoming restricted owing to stringent regulation, high cost, environmental pollution and growing public concern about synthetic products (Mesnage and Antoniou, 2018). Therefore, the challenge is to develop healthy and effective strategies to enhance nutrition and growth of crops.

Over the last years, organic agricultural system has emerged as an effective alternative to improve crop growth and quality (Willer and Lernoud, 2017). The rhizosphere, narrow zone of soil that surrounds and get influenced by the roots of plant (Prashar et al., 2014), is a highly favorable habitat for the proliferation of microorganisms and exerts a potential impact on plant health and soil fertility (Pathan et al., 2019; Qessaoui et al., 2019a). Bacterial species mostly associated with the plant rhizosphere known as “Plant growth promoting rhizobacteria” (PGPR) are non-pathogenic and reported to be beneficial for plant growth, yield and crop quality (O’Connell, 1992; Ahmad et al., 2008; Esitken et al., 2010; Olanrewaju et al., 2017; Qessaoui et al., 2019a). The success of some of these PGPR in laboratory studies and pilot tests conducted in the field have generated interest by several agrochemical companies in the development and commercialization of Bioproducts formulated with selected efficient PGPR. Several bacteria have been patented and evaluated for commercial use, of which BIOBOOST (Delftia acidovorans), BIOPLIN (Azotobacter spp.), BIOYIELD (Bacillus spp.), COMPETE (Bacillus, Pseudomonas and Streptomyces spp.) and KODIAK (Bacillus subtilis) are used as biofertilizers (Podile and Kishore, 2006).

Among the diverse range of PGPR identified, Pseudomonas is a wide distributed bacteria, which is considered as one of the most extensively studied and used in organic production system. Within the genus, fluorescent Pseudomonas bacteria the most studied (Weller, 1988). They are reported to prevent proliferation of plant pathogens and stimulate plant growth by facilitating either uptake of nutrients from soil or producing certain plant growth promoting substances (Weller, 1988; Sutra et al., 2000; Boudyach et al., 2004; Qessaoui et al., 2019a). Nevertheless, limited information is available on the promoting effect of fluorescent Pseudomonas on the growth of Citrus plants. Thus, the present research is aimed to (1) isolate fluorescent Pseudomonas from the rhizospheric soil of Citrus plants (Citrus macrophylla), (2) select efficient strains able to improve seed germination and growth of Citrus rootstocks.

Citrus root samples and soil adhering were collected from Citrus trees at Sapiama nursery, Taroudant, Morocco. The bacterial communities of the rhizosphere (RS) and the endorhizosphere (ER) were isolated as described by Dommergues and Mangenot (1970) and Amkraz (2010). One gram of rhizospheric soil, obtained by shaking roots, was added to 9 ml of sterile physiological water and the mixture was agitated for 15 min. Serial dilutions were prepared, and 0.1 ml of each dilution was dropped onto King B medium (King et al., 1954), supplemented with 100 g ml-1 of cycloheximide to suppress fungi. Three replicates were incubated at 28 °C for 72 h. Results were expressed as colony forming units per gram (cfu g-1) of rhizospheric soil. Fluorescent colonies on King B medium were sub-cultured twice before storage at 4 °C on yeast dextrose carbonate agar (YDC) (Jiménez et al., 2004) and at -80 °C in 40% glycerol (Parke et al., 1986). The isolates were identified in the plant protection laboratory at INRA Agadir (Qessaoui et al, 2019a).

Seeds of Citrus macrophylla were surface disinfected with 30% sodium hypochlorite solution during 5 min and air-dried. Seeds were then treated with isolated Pseudomonas (108 cfu ml-1) in Xantham gum 0.5% (Boubyach et al., 2001). Control seeds were treated by Xantham gum in the same conditions. All treatments were performed in three replicates with 10 seeds of each treatment. The inoculated seeds were placed in Petri dishes covered with Whatman paper and were incubated at 25±2°C. The percent of germination was calculated form 14th to 30th days after treatment.

During transplantation, C. macrophylla roots were inoculated with the Pseudomonas (108 cfu ml-1) using dipping method for 20s. After inoculation, the seedlings were transplanted into the plastic pots contains a mixture of sand and peat in a ratio of 2:1 (v/v). All treatments were performed in three replicates with nine plants of each replicate. The plant height, number of leaves and collar diameter of seedlings were evaluated at the second month after transplantation.

The seed germination and PGPR parameters were calculated for each Pseudomonas isolate. The data were subjected to the analysis of variance test (ANOVA) using Statistica software (Version 6). Any difference mentioned is significant at p less than 0.01 using Duncan’s tests.

The result shows the total number of bacteria per gram of soil and the percentage of fluorescent bacteria in both soils. Numbers of total bacteria were significantly higher in the rhizospheric soil compared to the endorhizosphere soil. However, the fluorescent Pseudomonas were significantly abundant in the endorhizosphere soil (Table 1). Seventy two (72) Pseudomonas isolates were selected in this work. These isolates were tested on seed germination and on the growth of C. macrophylla rootstock.

The results of germination showed that among 72 isolates, 30 have shown an inhibition effect on seed germination of C. macrophylla rootstock ( these results were excluded in the study). Among 42 isolates that showed a positive effect, only isolate C11 has a significant effect from 16th day after inoculation compared to the control (Figure 1).

The two isolates, C6 and C24, showed a significant effect on C. macrophylla rootstock height with 50 cm and 52% respectively. They showed a gain of 21 and 25 % respectively compared to control (Table 2). For the number of leaves, three isolates (C6, C24 and C26) showed no significant effect on leaf number compared to the control at 2nd month of transplantation (Table 2).

The collar diameter was evaluated in order to determine the effect of selected isolates on plant vigor of C. macrophylla rootstock. The results showed a significant effect of two isolates, C6 and C26, with a gain of 19 and 21% respectively, compared to the control (Table 2).

The Pseudomonas isolates identified in this study stimulate the growth of Citrus rootstock C. macrophylla in greenhouse conditions. Stimulating the growth of plants inoculated with each of these isolates could be explained by several mechanisms. For example by improving uptake of water and nutrients needed by plants and the inhibition of pathogenic agents which can damage growth of rootstocks. The phytohormones synthesized by rhizobacteria and the solubilization of phosphate stimulate the development of the root system and aerial part of plants. Some PGPR have the ability to synthesize indole-3-acetic acid (IAA), known for its beneficial effect on rooting and root development (Egamberdiyeva, 2005). Production of antibiotics and siderophores by bacteria which inhibit pathogenic fungi and bacteria that compete with plants for nutrition and space, thus allowing availability of nutrients and space. They consequently promote plant growth (Digat et al.,1993). The results of this study are consistent with numerous studies that have demonstrated the stimulation of plant growth after inoculation by bacteria. Indeed, Glick et al., (2007) reported that inoculation of plants with PGPR stimulates the growth and yield of plants, by the solubilization of phosphate, potassium and by stimulating the absorption of atmospheric nitrogen. The Pseudomonas act positively on the development of root system and stimulated significantly the length of the stem and collar diameter of plants (Gamalero et al., 2002; Satrani et al., 2009). Similarly, Esitken et al., (2006) showed that Pseudomonas BA-8 and Bacillus OSU-142 alone or in combination increase the nutrition, growth and yield of cherry plants. The results of the present study showed that the Pseudomonas C11 have potential to increase seed germination and the Pseudomonas C24, C26 and C6 have potential to increase the growth and vigor of Citrus rootstock plants. These bacteria could be a promising alternative as a bio-fertilizer for Citrus rootstock production.

Egamberdiyeva D. (2005). Plant‐growth‐promoting rhizobacteria isolated from a Calcisol in a semi‐arid region of Uzbekistan: biochemical characterization and effectiveness. Journal of Plant Nutrition and Soil Science, 168: 94-99.