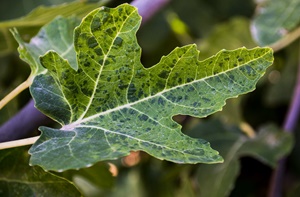 Fig (Ficus carica L.), a fruit tree widely grown in Morocco, is affected to a very large extent by fig mosaic disease (FMD), a complex with which eight viruses of different taxonomic position are associated. In order to select virus-free fig cultivars in Morocco, field surveys were conducted, between 2014 and 2018, in 11 different commercial orchards located in four regions (Azilal, El Jadida, Moulay Driss Zarhoune and Taounate). A total of 44 leaf samples representing 11 fig cultivars, without FMD symptoms, were prospected and collected for laboratory analyses. Total nucleic acids were extracted from leaf veins and tested by PCR for the presence of FMV, FLMaV-1, FLMaV-2, FMMaV, FLV-1, FBV-1, FFkaV and FCrV using specific primers. Among the 11 tested cultivars, only four (Chetoui, Rhoudane, Elquoti Lebied and Embar Lekhel) were free from the tested viruses. This study allowed the identification of at least one “virus-tested” candidate clone from four different fig cultivars which can represent the potential mother plants for propagating materials in order to establish new fig nurseries and orchards.

Fig (Ficus carica L.), a fruit tree widely grown in Morocco, is an important crop for the country, both economically and socially. In Morocco, fig trees are widely cultivated throughout the country, mainly as individual trees in private gardens and orchards for family consumption, but more rarely in specialized plantations. Fig plantations cover a total acreage of about 55,000 Ha, with an annual production reaching 127,000 Tons (Anonymous, 2017). The most important fig production areas are Taounate (22,230 Ha), Chefchaouen (7,050 Ha), Al Hoceima (5,000 Ha), Ouazzane (3,150 Ha) and Tetouan (2,000 Ha). Other plantations are distributed among Taza, Nador, Essaouira, El Jadida, Safi and other regions. Although more than 24 cultivars of fig are produced in the country, the most popular are El Messari or Homrame or Johri, Lembdar Labied, Lembdar Lekhel, Rhoudane, El Koté and Aounq Hmam.

As with any commercial crop, fig trees are subjected to various pest problems including virus diseases. Fig mosaic disease (FMD) remains one of the most serious pathological problem facing fig germplasm exchange and production. This disease, first reported from California (Condit and Horne, 1933), is now known to have a worldwide distribution. FMD is a complex with which eight viruses of different taxonomic position are associated: Fig mosaic virus (FMV), Fig leaf mottle associated virus 1 (FLMaV-1), Fig leaf mottle associated virus 2 (FLMaV-2), Fig mild mottle-associated virus (FMMaV), Fig fleck-associated virus (FFkaV), Fig latent virus 1 (FLV-1), Fig cryptic virus (FCrV) and Fig badnavirus 1 (FBV-1) (Martelli, 2011). FMV is the agent that occurs in symptomatic plants more often than any of the other fig-infecting RNA viruses and is the major incitant of mosaic (Chiumenti et al., 2013). Although no estimates of the economic impact of FMD are available, the notion that severely affected trees are less productive than those with milder symptoms and suffer premature fruit abscission has been taken as an indication that FMD can have a detrimental effect on the crop (Chiumenti et al., 2013).

The only known cure against virus and virus-like diseases is to provide healthy (virus-free) planting material, usually within the framework of a phytosanitation program based on diagnosis, detection and elimination of the causal agent(s) and the maintenance and distribution of healthy stocks. In this regard, the National Office for Food Safety (ONSSA) has launched, since 2013, a certification scheme for the production of fig plants in Morocco. This scheme has the aim of providing plants that are true-to-type, free from two fig-infecting viruses (FLMaV-1 and FLMaV-2), and substantially free from other pests.

The objective of the present study was to identify FMD-free fig trees to be used as mother plants for the production of fig plants in Morocco in order to establish new certified fig nurseries and orchards. To this aim, RT-PCR analysis has been used to detect the aforementioned viruses in candidate mother plants (without FMD symptoms), which were collected from different regions during field surveys along the country.

Five virus-free trees were found during the survey, two plants of cv. Chetoui and one of each cvs. Rhoudane, Elquoti Lebied and Embar Lekhel. These plants may represent potential sources of material for propagation in the framework of the certification scheme for the production of fig plants, which has been already established since 2013 in Morocco.

The present work has shown a much deteriorated sanitary status of the fig crop in Morocco (88.6% of viral infections). This is not surprising considering the mode of propagation of this species (by cuttings and grafting) and the presence of very efficient virus vectors. As there are no chemical products against these agents, the only known cure is to provide virus-free planting material, usually within the framework of a phytosanitation program based on diagnosis, detection and elimination of the causal agent(s) through sanitation. The present study allowed selecting four virus-tested cultivars that could be considered as potential candidate mother plants for the national certification program for the production of fig plants, which has been already established since 2013 in the country. Sanitary selection is a crucial step for virus control but it is also important to take into consideration the epidemiology of the detected viruses which is essential to preserve the selected fig plants. Further studies are planned in the country to initiate sanitation through heat therapy, meristem tip culture in vitro and combination of both techniques for obtaining virus-free mother plants for cultivars that are infected with viruses associated with FMD.

Elbeaino T., Digiaro M., De Stradis A. and Martelli G.P. (2007). Identification of a second member of the family Closteroviridae in mosaic-diseased figs. Journal of Plant Pathology, 89: 199-124.

Minafra A. and Hadidi A. (1994). Sensitive detection of Grapevine virus A, B and leafroll-associated virus III from viruliferous mealybugs and infected tissues by cDNA amplification. Journal of Virological Methods, 47: 175-187.