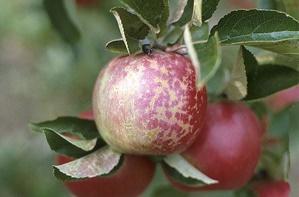 Apple powdery mildew, Podosphaera leucotricha (Ell. And Ev.), highly infects apple trees in the Fes-Meknes region in Morocco. A disease survey was carried out during fruit set stage of apples in late spring 2018. Three most popular cultivars in the region were assessed for the incidence and severity of the disease. It was obvious that the cultivars were highly susceptible to powdery mildew (Starking Delicious: 17.1%; Golden Delicious: 13.5% and Gala: 11.1%). The correlation between powdery mildew incidence and its severity was highly positive (r =0.90). We recorded the highest disease incidence in Tigrigra (21.5%) and the least in Sidi El Makhfi (4.1%). In view of ensuring good plant protection practices, we recommend that apple farmers carry out disease scouting and consider the action threshold before applying fungicide sprays.

Apple powdery mildew, which infects apple trees worldwide (Biggs et al., 2009), is caused by Podosphaera leucotricha (Ell. and Ev.) (Grove et al., 2003; Holb, 2009). The disease is very common in the apple-producing provinces in the Fes-Meknes region in Morocco. As a matter of fact, apple production in the provinces is faced with a number of challenges among which diseases pose serious problems with regard to control methods. Apple powdery mildew causes noticeable effects on the developing temperate fruits and extensive crop losses in all apple production areas (Blazek, 2004) .

Apple powdery mildew can easily develop under different weather conditions of apple-producing areas (Aldwinckle and Jones, 1990; Biggs et al., 2009). The disease can result in fruit russeting, loss of tree growth as well as yield. Moreover, the fungus may survive for many years in a plant material. This makes it so difficult to control (Yoder, 2000). Because of the long-lasting problem of the apple powdery mildew, more control efforts require the knowledge of how susceptible the cultivars are (Biggs et al., 2009). Infected trees of susceptible cultivars may be seriously affected if a control measure is not taken into consideration (Sholberg and Haag, 1994).

The prevalence of apple powdery mildew in the Fes-Meknes region results in a number of fungicide applications. More importantly, no cultivar susceptibility has been documented in the region. In this regard, the survey was carried out primarily to determine the difference in the susceptibility of three cultivars in the apple orchards across three major apple-producing provinces in Fes-Meknes region.

We conducted a survey in three main apple-producing provinces in the Fes-Meknes region, where apples have been established since 1920s (MADRPM, 2014). The surveyed provinces were El Hajeb, Ifrane and Sefrou. The three most popular cultivars of apple in the region, Golden Delicious, Starking delicious and Gala were keenly inspected in a given location. Out of about twenty cultivars of apples grown in Morocco, Golden Delicious occupies approximately 50% of the surface area, followed by Starking delicious (14%) and about 5% of Gala cultivar (MADRPM, 2014). Subsequently, the disease incidence and severity of powdery mildew (Figure 1) were recorded based on the three selected cultivars in an orchard. Furthermore, the geographical coordinates of each orchard were recorded in view of mapping out and comparing the prevalence of these two diseases. A total of 99 apple orchards were surveyed in the three provinces (Table 1).

Quantification of disease incidence and severity of apple powdery mildew

The commercial orchards were surveyed during the fruit set stage in the growing season of 2018. The assessment was carried out after dormant sprays and systemic fungicides have been applied in the orchards. We assessed the severity of powdery mildew by comparing sampled leaves to the standard scales. To do this, trees were keenly observed at random from each orchard. Disease incidence and severity were assessed on apple trees and leaves with visible symptoms. Disease incidence, as the proportion of infected trees with at least one lesion on a leaf, was calculated as: P = n/N x 100 (P is disease incidence expressed in percentage, n is number of attacked trees, N is total number of investigated trees).

The disease severity, scored as percentage plant leaf area affected with powdery mildew, was evaluated visually on individual leaflets as the percentage of infected area, using a 0 to 4 scale (Kim et al., 2004) (Table 2).

Three different cultivars of apple were taken into consideration at random in the apple orchards in the three provinces. Since several cultivars are found in the some orchards, the plots were chosen for each cultivar.

The data gathered were analyzed with the aid of Excel 2013. Student test with two-sample assuming unequal variances with alpha value at 0.05 were performed.

Disease monitoring and forecasting is a fundamental part of integrated pest management to rationalize fungicide use. Visual monitoring of 20-50 trees per orchard of apple powdery mildew from green tip to fruit maturity stage will help reduce costs and fungicide inputs. Hickey (1983) suggests a special action threshold level at 20% leaf infection for fungicide application against apple powdery mildew. Knowledge on disease threshold, although not easily implemented, will help farmers confirm the efficacy of fungicide sprays.

Apple powdery mildew is a major problem of apples in the surveyed region. The present results, obtained from the field survey on the prevalence of apple powdery mildew, show that the three major cultivars were susceptible to these diseases in the surveyed region. The most susceptible cultivar to apple powdery mildew was Starking Delicious. However, the study also showed no statistical differences between either the incidence or the severity of apple powdery mildew of the three varieties. The diseases were influenced by the conditions of temperature and rainfall, which varied among the three provinces. In view of ensuring good plant protection practices, we recommend that apple farmers carry out disease scouting and consider an action threshold before applying fungicides.

Byarugaba A. A., Gard T., Kashaija I. N. (2013). Prevalence of apple scab and powdery mildew infecting apples in Uganda and effectiveness of available fungicides for their management. African Journal of Agricultural Research, 8: 2063-2067.