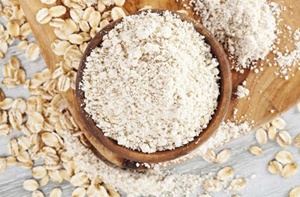 Food industries have been increasingly interested in oat grain thanks to its bioactive compounds with confirmed functional properties. This study aims to explore the effect of oat flour particle size of 425 µm, 560 µm, 670 µm, 1000 µm, whole flour and bran on beta-glucan and polyphenol content. The six flour fractions from three Moroccan oat varieties, of which one is naked grain, were investigated. The three oat varieties have beta-glucan contents respectively of 4.08 %, 3.42 % and 2.49 % and polyphenols contents of 351.0, 360.7 and 560.1 µg EAG/g. Results showed high contents of these two compounds in the bran fraction and the fraction with a particle size smaller than 1000 µm and greater than 670 µm. The beta-glucan content showed the largest variation, from 6 % in both fractions to 1.3 % in the fraction with particles smaller than 425µm. Mastering the process of oat flour fractionation could generate quality dense oat fractions adapted to the manufacturers' requirements and investigating other fractionation protocols is highly recommended.

Oat grain is mainly used as livestock feed, but its use in human food has attracted considerable interest in recent decades because of its special nutritional values and chemical composition. Oat grain is a source of nutritious protein, dietary fibre, fat and micro-constituents that are beneficial to human health (Rajvir et al., 2018).

Scientific research has shown that oat consumption can reduce the risk of heart disease, cholesterol levels and can improve the feeling of satiety for weight control. Oats, compared to other cereals, contain a higher protein and fat content, ranging from 12 to 20% (w/w) and 2 to 13% (w/w), respectively (Kaimainen et al., 2012). Oats are an excellent source of energy and essential fatty acids due to their high lipid content (Soycan et al., 2019).

Oats are a good source of soluble dietary fibre, especially β-glucan, which has exceptional functional and nutritional properties. β-glucan is considered the main active ingredient in oats because of its anti-diabetic and hypo-cholesterolemic effects (Mrydani et al., 2009). However, the nutritional benefits of oats appear to extend beyond fibre to bioactive phytochemicals with powerful antioxidant and anti-inflammatory effects (Soycan et al., 2019; Sang and Chu, 2017). Indeed, two unique phytochemicals in oats, avenanthramides, and avenacosides A and B have shown powerful antioxidant activity in vitro and in vivo and are still in the early stages of research on their health effects (Sang and Chu, 2017). In addition to their nutritional potential, oats have attracted particular attention due to their prolamine composition and amino acid sequence which make them interesting for the development of gluten-free food products for celiac patients (Shah et al., 2016).

Flour fractionation based on particle size is a technique widely used by the cereal industry to produce different types of flour and semolina to meet the requirements of manufacturers. Indeed, particle size can greatly affect the physicochemical properties of flours, such as water absorption, damaged starch content, sizing properties and thus has a significant impact on the rheological behavior of dough and bread (Dimitrios et al., 2019; Angelidis et al., 2016). In particular, large particles disrupt the protein network of the dough and decrease oil absorption during frying when used in coating formulations, while small particles are responsible for water absorption, viscosity, plasticity and softness of the dough (Protonotariou et al., 2014). Other studies carried out on barley cereal have shown that fractionation by grinding or abrasion can lead to a concentration of its components leading to the generation of fractions enriched in bioactive compounds (Gangopadhyay et al., 2018).

This work was undertaken to study the physicochemical properties of three Moroccan varieties of oats and evaluate the effect of fractionation of oat flour on its β-glucan and total polyphenol contents. This study will help in developing the use of oats for domestic and industrial purposes.

Physico-chemical characterization of the three varieties

The β-glucan content was determined by enzymatic method using the Megazyme Kit. The method is recognized in the AACC (AACC 32.23.01).

Extraction: The extraction method used is that recommended by Zielinski and Kozlowska (2000). The sample is extracted with an 80% ethanol solution. The extract was recovered after centrifugation and filtration.

Determination of total polyphenols: the Folin-Ciocalteu method described by Paras and Hardeep (2010) was used. The results are expressed in µg gallic acid equivalent per gram of dry matter.

After dehulling and milling, the wholemeal flours obtained were sifted using a Chopin sifter with sieves of different size, where they were divided into fractions. Five fractions were obtained by using sieves with the following mesh sizes: 425 μm, 560 μm, 670 μm and 1000 μm and bran (the rejection).

Determination of β-glucan and total polyphenols in the five fractions

The flours obtained after sifting were analyzed for their content of β-glucan and total polyphenols. The protocols followed are those listed above.

Characteristics of the three oat varieties

The results show the average content of the measured elements in the three oat varieties, with variety A1 being the most important in terms of β-glucan content (4.04 %) (Table 1). The β-glucan content in oat grain ranges from 1.8 % to 7.5 % depending on the cultivar (Liu, 2010). All three varieties are rich in fat (between 10.1 and 10.4%). This content generally varies between 2.0 and 11.8 % (Zhou et al., 2014), up to 18% in some oat lines (Liu, 2010). The lipid fraction of the oat grain largely determines its energy content and has a significant impact on nutritional balance. On the other hand, the high lipid content in oats is responsible for oxidative rancidity and is the limiting factor in the storage and handling of oat products (Extrand et al., 1993). In the production of oat products for human consumption, it is generally considered necessary to inactivate lipases (Zhou et al., 1999).

Test weight is one of the criteria for grading grain and the values recorded are relatively low. The literature (Akpakouma, 2012) records specific weights up to 56 (Kg/hl) for dressed grain oats and up to 72 (Kg/hl) for naked grain oats.

Variable results between authors on nutrient amounts may be due to the cultivars, but also to the methods and conditions of analysis (Lullien-Pellerin, 2014).

In cereals, oats are considered the best source of β-glucan after barley, its derived products may carry the health claim “lowers blood cholesterol” if they can provide 3 g per day of β-glucan and the claim “reduces postprandial blood glucose” with the consumption of 4 g β-glucan/30 g available carbohydrate (Harland, 2014). To achieve this, processors have an interest in enriching their products with β-glucan-rich fractions.

Figures 1, 2 and 3 show the variation of β-glucan content in the five fractions analyzed compared to the initial content in wholemeal. For the three varieties studied, it can be observed that β-glucans tend to concentrate in the “bran” fractions and the fraction corresponding to the particle size greater than or equal to 1000 µm. These fractions can be used as an ingredient with health value in different food preparations. On the other hand, fine fractions lose significantly their β-glucan content. In fact, although fine particles have a positive effect on the technological properties compared to coarse particles, in the case of oats it depletes them of the most sought-after essential element, which is β-glucan. In our results, the β-glucan content in the 425 µm fraction does not exceed 1.3% for the three varieties while they reach up to 6% in the coarse fractions.

Similarly, the polyphenol content varies in the different oat fractions. Figures 4, 5 and 6 show that the highest levels are located in the coarse fractions (bran and 1000 µm) and unlike β-glucan, the other fractions maintain levels close to wholemeal flour with the exception of the A3 variety which is bare grain, where the polyphenol content decreases sharply in the 425 µm fraction.

Iin cereals, the content and distribution in the grain of the major bioactive compounds vary between species. β-glucan is relatively evenly distributed throughout the endosperm in barley while oats have a concentration of β-glucan in the thick cell of the subaleuron layer (Rieder et al., 2012) and phenols exist in both free and bound forms. Among the free polyphenols, avenanthramids, which occur exclusively in oats, are of major importance due to their functional importance. They are found mainly in the bran fraction (Antonini et al., 2016).

Oat has been re-evaluated in recent years as a promising crop for improving the nutritional quality of foods, due to its richness in many bioactive compounds, especially β-glucans and polyphenols, but its incorporation into food products still presents challenges. According to London et al., (2012), oats are not suitable for use in baking in the absence of fractionation.

Most of the nutrients are found in the peripheral tissues of the oat grain. This largely explains the results of this work. In fact, it has been proven that the β-glucan of oats is located in the external parts of the grain unlike barley, which is more homogeneously distributed in the grain (Rieder et al., 2012). As a result, conventional fractionation of oats based on particle size has resulted in “bran” and “1000 µm” fractions that are rich in bioactives but will have technological limitations. The challenge will be to further fractionate these two fractions by using other techniques that can improve and expand the potential use of oats in food by increasing the nutritional density of regular flours.