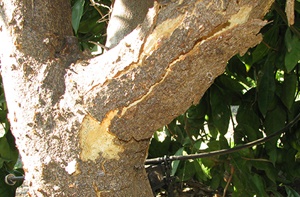 Viroids are the smallest known pathogens of plants. They are single-stranded, circular, rod-like RNAs with no protein capsid nor any detectable messenger activity. Citrus species are natural hosts of at least seven viroids of the Pospiviroidae family. Exocortis and cachexia are the most important viroid diseases of citrus in Morocco. In order to assess the incidence and distribution of Citrus exocortis viroid (CEVd) and Hop stunt viroid (HSVd), extensive surveys were conducted, between 2008 and 2018, in the main citrus growing areas of the country. A total of 100 commercial citrus groves of different varieties were inspected for symptoms of exocortis and cachexia, and 5390 samples were collected for laboratory analyses, using imprint hybridization. Representative positive and negative samples for each viroid were selected and submitted for additional confirmatory RT-PCR assays using specific primers. The incidence of infection by viroids was about 29.0 %, regardless of citrus species and location, although a slightly higher number of infected trees were located in the Gharb region (41.5 %). CEVd was detected in 11.3 -18.2% of the tested samples, while HSVd was detected up to 10.8 % of the samples tested. Since CEVd and HSVd are readily mechanically transmissible via working tools, they affect both old and young plantings in all the surveyed regions.

Citrus trees are a major fruit crop in Morocco. They cover about 125,000 ha with an average yearly production of 2 million tons of which about 40 % is exported as fresh fruits (Anonymous, 2017).

Citrus exocortis viroid (CEVd) was described in 1948 as a bark shelling or scaling disorder affecting trees grown on the trifoliate orange (Poncirus trifoliata (L.) Raf.) rootstock (Fawcett and Klotz, 1948) and is widely prevalent in citrus growing areas of the world (Timmer et al., 2000). CEVd is the largest citrus viroid at 371-nt, and produces the most pronounced symptoms of leaf epinasty, stunting, and necrosis of the leaf midvein. CEVd is a species of the genus Pospiviroid and it was the first citrus viroid described (Roistacher, 1991). CEVd is distributed primarily by the introduction and propagation of infected budwood, by top working and by mechanical transmission (Garnsey and Jones, 1967). CEVd is not known to be vector or seed transmitted.

Cachexia disease is found in most citrus growing countries of the world (Roistacher, 1983). Hop stunt viroid (HSVd), a species in the Hostuviroid genus, contains 295-303 nucleotides (Roistacher and Garnsey, 1988; Reanwarakorn and Semancik, 1999) and is a major pathogen of mandarin and tangerine species in the world (Catara et al., 1988) causing tremendous losses in yield and quality of the fruits. Cachexia was first described in 1950 as a disease of Orlando tangelo with the following symptoms: discoloration, gumming and browning of phloem tissue, wood pitting and bark cracking (Childs, 1950). The viroid is transmitted by vegetative reproduction or mechanical means, e.g. pruning or other practices, which may lead to plant damage. Mechanical harvesting and other operations lead to spread along the rows in commercial hop plantations (Pethybridge et al., 2008).

Field surveys were conducted between 2008 and 2018, in the main citrus growing areas of the country: Gharb, Haouz, Loukkos, Moulouya, Souss and Tadla. A total of 100 commercial citrus groves of different varieties were inspected for symptoms of exocortis and cachexia, and 5390 samples were randomly collected from different mature trees (15- to 20-yr-old) of sweet orange (Citrus sinensis) cvs, Washington Navel, Valencia late, clementine (C. clementina) and lemon (Citrus limon). Plants showing symptoms of viroids were also included in the sampling. All samples were tested by imprint hybridization for Citrus exocortis pospiviroid (CEVd) and Hop stunt hostuviroid (HSVd) according to the protocol described by Palacio et al., (1999, 2000). For confirmatory tests, representative positive and negative samples for each viroid were selected and submitted for additional RT-PCR assays using specific primers for each agent (Wang et al., 2009). Total nucleic acids (TNAs) were recovered from 0.2 g of leaf petioles ground in liquid nitrogen as described by Foissac et al., (2001). For reverse transcription, first strand cDNA was synthesized from 0,5 μg of total RNA using random primers (Noris et al., 1994).

The results of the present survey showed that HSVd and CEVd were found to be widespread with an infection rate of 10.8 % and 18.2 % of the tested samples and were detected in almost all citrus species and cultivars (Table 1). CEVd and HSVd were detected in most surveyed groves across the country, but not in the nurseries. Typical symptoms of bark cracking and scaling of exocortis were observed on Citrange Carrizo rootstock in the Gharb, Loukkos and Tadla regions. The highest infection rate of CEVd was recorded in the Gharb region with an infection rate of 29% followed by Loukkos region with 20%. Cachexia was frequently found in mandarin orchards in most of the country’s citrus production areas. In the nurseries surveyed, No HSVd-infected plant was detected. Afechtal et al., (2016) found the Hop stunt viroid on common clementine and Valencia late in the Gharb region. Most of these inspected trees carried more than one viroid. In most cases, the infected trees are asymptomatic carriers because sour orange, the predominant rootstock used in Morocco, does not show symptoms of viroid infection.

Similar results were reported by Malfitano et al., (2005) in Campania (Italy) who found that HSVd and CEVd are the most widespread viroids infecting 87 % and 68 % of the tested samples and were detected in almost all citrus species and cultivars. They were frequently found in mixed infection. In Tunisia, HSVd and CEVd were described by Duran-Vila et al., (1988) by molecular hybridization. Their results showed that these two viroid species were highly widespread accounting respectively for 70.3% and 72.3 % of the sources tested.

In the present study, imprint hybridization has been applied for the evaluation of occurrence and distribution of citrus viroids in Morocco. A total of 20 representative positive and negative samples for viroids (CEVd, and HSVd) were selected and submitted for additional RT-PCR assays using specific primers for each viroid. In the assay, positive and negative controls were included, for each agent. RT-PCR results were similar to those obtained above using molecular hybridization technique. Both techniques confirmed the presence of the CEVd and HSVd in all surveyed areas.

The high incidence of CEVd and HSVd observed during the survey is probably due to the use of infected bud wood material. Therefore, the use of healthy (virus-free) planting material, usually within the framework of a phytosanitation program based on diagnosis, detection and elimination of the causal agent(s) through sanitation could prevent viroid infection. Contamination tools and top-grafting may have been responsible for viroid spread and accumulation in individual trees. Therefore, transmission and dissemination of viroids could be prevented by treating budding knives, pruners, clippers in sodium hypochlorite solution (Arif et al., 2005). Furthermore, it is important to mention that the high viroid contamination rate should be taken into consideration when new rootstocks will be chosen to manage the tristeza disease.

Catara A., Azzaro A., Mughal S. and Khan D. (1988). Virus, viroid and prokaryotic diseases of citrus in Pakistan.In: (eds). Proceedings of 6th Conference of the International Organization of Citrus Virologist. Tel Aviv.

Duran-Vila N., Roistacher C., Rivera-Bustamante R. and Semancik J. (1988). A definition of citrus viroid groups and their relationship to the exocortis disease. Journal of General Virology, 69: 3069-3080.