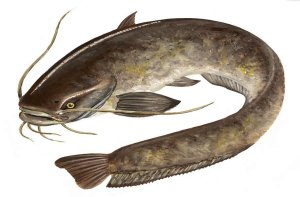 To allow the production of healthy fish in the numerous water reservoirs available in Benin in spite of their exposure to agricultural pesticides, a decontamination phase has been integrated in the farming techniques. This study was conducted to assess the effect of this decontamination on organoleptic quality and acceptability by consumers in Clarias gariepinus produced in the Batran water reservoir. Fish produced in this water reservoir and those decontaminated were smoked and presented to the panel of assessors. Evaluation was based on five sensory parameters and many attributes on an intensity scale. Results show that the odour of smoke, golden colour, oily and dry general aspect, firm texture at manual handling, soft taste and the juicy and fibrous texture in the mouth characterize both types of fish. The mean values of the attribute intensity scales are mostly greater than 3 and close to the maximum limit of 5, indicating a good acceptability by consumers. For all the intensity scales, there is no significant difference between the two types of fish (p > 0.05). Therefore, the decontamination do not negatively affect the organoleptic quality and the acceptability by consumers of Clarias gariepinus produced in the cotton basin water reservoirs in Benin.

Fish is an important source of nutrients as it provides a good balance of high quality proteins, lipids, vitamins and minerals (Balami et al., 2019). This foodstuff constitutes an important and relatively cheap source of animal protein to people in sub-Saharan African countries (Mustapha et al., 2014). In Benin, fish is the first source of animal protein consumed by the poorest segments of the population throughout the national territory (JICA-MAEP, 2017). The quantities consumed are obtained from capture fisheries, importation of frozen fish and fish farming (DPH-SADA, 2019).

Fish farming sector is relatively recent in Benin and continues to seek for sustainable development. Thus, measures are multiplying at the national level in making fish farming a flagship activity in supplying fish of good quality to the Benin populations. In this regard, Pèlèbè (2019) has carried out scientific research work that has led to the establishment of techniques for healthy fish farming in the Benin water reservoirs mainly available in the northern region (Azonsi et al., 2008), an area of huge agricultural production, especially cotton production. These techniques consist of producing fish in cages and pens installed in water reservoirs and subsequently transferred at the end of the in situ production into tanks containing agricultural contaminate-free water for decontamination (Pèlèbè, 2019) in order to mitigate the ecotoxicological risks linked to agricultural pesticides (Pèlèbè et al., 2019).

Furthermore, it is clearly known that fish quality characteristics are influenced by rearing techniques (Orban et al., 2000). Organoleptic quality is one of the most important aspects of foodstuff quality because the food sensory properties principally determine consumer preferences and satisfaction (Tuorila and Monteleone, 2009). It consists of the sensory perceptions that can be subdivided into characteristics of appearance or color, flavor, and texture and assessed using the human senses of vision, smell, taste and touch as a measuring instrument (Assogba et al., 2018).

Also, organoleptic quality brings together all the factors that determine the acceptability of fish and induce the purchasing decision at the consumer level (Haard, 1992; Brosnan and Sun, 2004). Consumers do not buy products with low-quality even at reduced prices, therefore high quality is necessary to expand in market (Gjedrem, 1997). It is against this backdrop that the present study seeks to determine the effect of the proposed decontamination technique on the organoleptic quality of the fish especially African catfish (Clarias gariepinus). A comparative study of the organoleptic quality of C. gariepinus directly reared in the Batran water reservoir, located at the cotton production basin, and a decontaminated one was therefore carried out.

Choice of the cooking mode before consumption

For both fish produced directly at Batran (148 days in the water reservoir) and those decontaminated (120 days in the water reservoir and 28 days in the tanks containing water without agricultural contaminants), twelve individuals of Clarias gariepinus randomly chosen at the rate of six per type of rearing system (cages and pens) were smoked in the SIARP oven. In fact, smoking is predominantly used in north part of Benin to cook fish before consumption (Kpokpo, 2018). The oven used is metallic, mobile and energy efficient, it operates on charcoal. This oven was developed by the Aquaculture Department of the University of Ibadan in Nigeria and imported into Benin by the Non-Governmental Organization Aquaculture and Sustainable Development (AquaDeD ONG).

To euthanize the fish (C. gariepinus) and facilitate the removal of body mucus, 400 g of cooking salt was added to the fish deposited in a closed container. They were gutted and their gills were removed before the washing in two brines (100 g of cooking salt in 5 L of water each) in order to cleanse all the mucus from their body. The fish (370.0 ± 52.3 and 403.0 ± 75.8 for fish from Batran and those decontaminated, respectively) were then bent to make better use of the oven. The bent fish were spread over one of the oven trellises and left for 30 minutes for draining. The smoking consisted to expose the fish for 9-10 hours to the action of smoke and heat from the coal combustion. After the smoked fish had cooled, they were packed in black bags previously cleaned with 90 ° C alcohol.

Constitution of the panel and organoleptic properties evaluation

Fish organoleptic quality assessment was done the day after the smoking process. The evaluation panel was composed of 12 members (6 men and 6 women) who regularly consume fish and are non-smokers. They were trained on the evaluation procedure. Panelists were advised not to eat 2 hour before starting the evaluation. For the appreciation of the organoleptic quality and fish acceptability, 50 g of each type of smoked fish was wrapped in aluminum foil and given to the panelists installed in a lighted and air-conditioned room (Figure 1). Rinsing the mouth between the appreciation of the two types of fish was done using tap water. Each panelist had an evaluation sheet containing five sensory parameters (odour, colour, general aspect, texture at the manual handling, texture in the mouth and taste) and attributes inspired from Stones et al. (1974) and Koumi et al. (2011) (Table 1). The attributes were assessed on an intensity scale ranging from 0 (low intensity) to 5 (high intensity) and are perceived by human senses (sight, smell, taste and touch) before, during and after fish ingestion by the panelist.

Data were encoded in the Excel spreadsheet. Relative frequencies and means (± standard deviation) were calculated for the attributes choice and the intensity scales values, respectively. Using STATISTICA 6.1 software, the Student T test with independent samples was used to compare the intensity scales values of organoleptic quality attributes between the fish produced directly at Batran and those decontaminated. The significance threshold was 5%.

Efficiency of the fish smoking, the cooking method used to assess the fish sensorial quality

With the smoking technique used, we obtained smoked fish with a weight loss compared to initial fresh fish of 73.4 % and 73.6 % for fish produced directly at Batran and those decontaminated, respectively (Figure 2).

The reduction in weight is linked to the water loss. The values obtained are quite high according to Yanar (2007). This reflects the good quality of smoking, ensuring better preservation and conservation of the quality of the product obtained (Abraha et al., 2018).

Figure 3 shows the proportions of tasters who chose the attributes for each parameter for the fish directly produced in the Batran water reservoir and for those decontaminated. The attributes were the odour of smoke, the golden colour, the oily and dry general aspect, the firm texture at the manual handling, the soft taste and the juicy and fibrous textures in the mouth are the most represented (Figure 3). The mean intensity scales of these most represented attributes are very high because they are greater than 3 and close to the highest limit value of 5.

There was no significant difference between the fish produced in the Batran water reservoir and those decontaminated (Table 2). Therefore, these fish have the same organoleptic quality and have a good acceptability to consumers.

The sensory quality of fish flesh is intrinsically linked to the body biochemical composition at the slaughter stage (Huss, 1999; Hallier et al., 2007) which depends on the farming conditions, mainly on feed management (Lefèvre and Bugeon, 2015; Lebret et al., 2015; Lefèvre and Bugeon, 2008). The statistical similarity between the mean values of the intensity scales for all the attributes used can be explained by the fact that during both in situ production and decontamination phase (28 days), fish were fed with the same extruded commercial feed (Le Gouessant) using the same strategy (Pèlèbè, 2019). In addition, according to Huss (1988) and Grigorakis (2007), environmental parameters can also influence the sensory and nutritional properties of fish. But in our study, it is important to note that the main physical and chemical water quality parameters were within the ranges tolerated by Clarias gariepinus during both direct production in the reservoir and during decontamination. Likewise, it is possible that the 28 days that decontamination lasted and during which the fish were in two different farming systems may also be short enough to induce a significant influence of the farming environment. Our results corroborate those of Rocha et al. (2012) in which the sensorial quality of the fillet of Nile tilapia was similar in ponds and net-cages with employing similar types of feed, dietary protein contents, feed rates and frequencies.

This work revealed that to decontaminate Clarias gariepinus at the end of its production in the Batran water reservoir located at the cotton basin production of Benin does not influence its organoleptic quality after smoking and its acceptability by consumers. The integration of the decontamination phase in the technical itinerary of healthy fish production in the water reservoirs of the cotton basin should be promoted.

Hallier A., Serot T., Prost C. (2007). Influence of rearing conditions and feed on the biochemical composition of ﬁllets of the European catﬁsh (Silurus glanis). Food Chemistry, 103: 808-815.