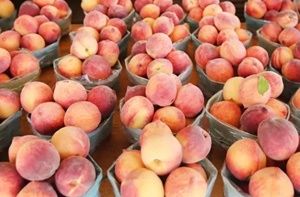 Preharvest foliar calcium (Ca) products sprays (@ 1%)   supplied as Ca oxide, Ca chloride, or Ca thiosulfate were applied on four peach cvs. to determine the effect of Ca formulations on fruit quality and shelf life. Treatments were designed to cover the entire period of fruit growth from fruit set to maturity, thus each calcium formulation was applied three to four times at 6 to 15-days interval depending on fruit growth rate. Multiple harvest times were realized with the progress of fruit commercial maturity, fruit samples of the first and last harvest of each cv. were either analyzed or stored for shelf life evaluation. Treatments with Ca products resulted in a significant increase in fruit firmness, for both harvests of all peach cvs., maximum increase was obtained by Ca chloride applications in three cvs., while fruit acidity was slightly increased in three varieties. Applications of Ca also reduced the number of fruit with split pit. Postharvest fruit weight loss was decreased by Ca treatments after 8 days storage; maximum storage period occurred with Ca chloride treatment, followed by Ca oxide treatment at the second position. Decay incidence was consistently reduced by Ca application for all peach cvs, mostly for the first harvest, relatively to the second one; the lowest rate of decay was recorded for Ca chloride treatment.

The effectiveness of pre and post-harvest calcium salts on shelf - life and quality of peach fruits were studied by many authors. It was shown that calcium salts applied over 2-years period either as Ca chloride or Ca propionate four to five times over the growing season, increased firmness at harvest and after cold storage, especially when Ca chloride was the active ingredient used (Val and Fernandez, 2011). Evaluation of the development of physiological disorders after cold storage (2 weeks at 0 °C) indicated a lower susceptibility of Ca-treated fruits to internal browning and chilling injuries as compared to untreated peaches (Val and Fernandez, 2011). The application of calcium chloride @ 1.5% at pit hardening stage, 10 and 20 days after pit hardening, resulted in minimum physiological loss in weight, total sugars and maximum fruit firmness, sensory quality score, pulp: stone ratio, total phenolics and calcium content during storage period of 30 days at temperature 0-10 and RH 85-90% (Raja et al., 2015). In another study, the application of 6 or 10 preharvest calcium spray on cv. Andross peach resulted in a significant increase in the peel (25–42%) and in the flesh (11– 17%), 1 d after harvest. The increase of cell wall calcium corresponded to increase of calcium in the insoluble pectin fraction, whereas no differences were detected in the calcium of water-soluble pectin fraction. Calcium sprays resulted in significant decrease of brown rot development, although no effect on disease incidence was recorded (Manganaris et al., 2005). Other different results were obtained on mid- or late season peach and cultivars since foliar calcium sprays applied every 14 days, starting two weeks after bloom and continuing until one week before harvest, did not affect fruit soluble solids concentration, fruit firmness, fruit internal breakdown, and fruit calcium concentration at harvest eventhough calcium concentration was raised in three of four varieties studied (Crisosto et al., 2000). Foliar application of calcium salts on ‘Florida King’ peach cultivar for two consecutive years resulted in an increase in fruit weight, fruit diameter, pulp: stone ratio and yield, and also higher fruit firmness, acidity and ascorbic acid contents than control (Ifran et al., 2014).

The objectives of this study were to determine the effect of different calcium formulations on quality and shelf life of peach varieties, and its relationship to the timing of fruit harvesting.

Treatments consisted of pre-harvest spray of calcium formulations (1%) supplied as calcium oxide (CaO), calcium chloride (CaCl2), or calcium thiosulfate (CaO3S2) while control treatment received only water application. These treatments applied with a dorsal sprayer at the rate of 2 L/tree, were replicated four times in a randomized complete block design. Each treatment was applied early in the morning to three trees per plot separated by a one-tree buffer. Treatments were designed to cover the entire period of fruit growth from fruiset to maturity, thus each calcium formulation was applied three to four times at 6 to 15-days interval depending on fruit growth rate, 4 applications for ‘Alexandra’, and ‘Rome Star’ (May 25, June 10, 20, and 26); and ‘Red Robin’ (April 25, May 10, 21, and 26) and 3 applications for ‘Coraline’ (May 5, 20, and 26).

Multiple harvest times were realized with the progress of fruit commercial maturity, at each harvest, the number and weight of fruits for each plot of each variety were determined. To measure fruit quality characteristics, 10 fruits per replicate were randomly selected at the first and last harvest of each variety. The fruit quality traits measured were: weight, total soluble solids (ATAGO digital refractometer), titratable acidity (TA; g malic acid [L juice]-1, juice pH (data not given), flesh firmness (Digital Penetrometer PCE-PTR Mit PC-Schittstelle, fitted with a 9 mm tip). Post-harvest physiological disorders were visually monitored on sectioned fruits following the longitudinal axis.

To assess the effect of pre-harvest calcium formulations on shelf life of fruit, another randomly selected sample of 28 fruits per treatment (7 fruits/plot) from the first and last harvest of each variety, was held under ambient conditions (Temperature 15-20 °C, 50-70% RH), fruit weight loss and rot incidence (rotted fruits were daily eliminated) were evaluated each four days during the 2 weeks storage period.

The crop weight per tree averaged 27.2 kg, for all treatments and ranged from 24.50 to 30.62 kg (Table 1). There were significant differences in crop weight between treatments due principally to the number of fruits per tree. Fruit weight and soluble solids concentration were not affected while fruit acidity was slightly decreased by calcium treatments. Fruit firmness was significantly affected by Ca treatments for both harvests; maximum increase was obtained for Ca chloride treated fruit, 28% in the first harvest and 25% in the second one, relatively to the respective control.

The incidence of decay was significantly reduced by Ca applications the first 8 days storage, especially for the first harvest with Ca oxide and Ca chloride resulting in no decay (Figure 2). After 12 days storage, decay incidence of treated fruit ranged from 3 to 10% for the first harvest, and from 11 to 14% for the second harvest, relatively to the control to the control 12% and 14%, respectively.

There was no significant difference in trees crop weight between treatments, the crop weight averaged 42.84 kg per tree and ranged from 41.64 to 45.27 kg per tree (Table 2). Fruit weight and soluble solids concentration were not significantly affected by Ca treatments while fruit acidity was increased for both harvest dates. Fruit firmness was significantly increased for all Ca treatments; maximum increase was obtained by Ca thio-sulfate treatments, 32% in the first harvest and 26% in the second harvest, compared to their respective controls.

Incidence of decay was reduced by all Ca treatments for both harvests but consistently for the first one (Figure 4). The rate of incidence was relatively low during the first eight days storage, but increased rapidly thereafter to attain 15% and 26% after 12 days storage, for the control of the first and last harvest, respectively. However the Ca treatments incidence results ranged from 7 to 12% for the first harvest and from 18 to 22% for the second harvest. Ca chloride treatment resulted in the lowest decay incidence for both harvests.

The average crop weight of the cv. Red Robin was 38 kg/tree; there was no significant difference between treatments (Table 3). Fruit weight was not affected, while fruit soluble solids concentration was significantly increased for all Ca treatments of second harvest, relatively to the control, this is not the case of the first harvest. All Ca treatments resulted in significant increases in fruit firmness and decreases in fruit acidity of both harvests. Maximum increases (22% relatively to respective controls) were obtained by Ca chloride in both harvests and Ca oxide treatment in the second harvest.

The average crop weight par tree corresponded to 53.85 kg and ranged from 49.74 to 55.69 kg (Table 4). There were significant differences in crop weight between control (49.74 kg/tree) and treated trees (54.92 to 55.69 kg/tree), due mainly to the number of fruits per tree. Fruit quality parameters including berry weight and soluble solids concentration were unaffected by Ca applications at any crop harvest date. Fruit acidity was slightly decreased for both harvests. However, fruit firmness was significantly increased by Ca applications for all harvests. The maximum increase was obtained by Ca chloride applications, 18.4% relatively to the control in the first harvest and 32.4 relatively to the control in the second harvest.

Incidences of decay were minimal for Ca treated fruit in the first harvest, ranging from 0 to 4% and from 4 to 11% after 8 and 12 days storage, respectively; corresponding to 9 and 15% for the control. For the second harvest there was a slight decrease in decay incidence following Ca applications (Figure 8).

Multiple applications of calcium across all peach cvs. resulted in a significant increase in fruit firmness, for both harvests, maximum increase was obtained by Ca chloride applications in three cvs. ‘Alexandra’, ‘Red Robin’, and ‘Rome Star’. It was shown that the application of multiple Ca-containing sprays increased fruit firmness at harvest and after cold storage of peach, especially when Ca chloride was the active ingredient used (Val and Fernandez, 2011). Other studies also reported that Ca chloride sprays improved peach firmness (Lysiak et al., 2008; Raja et al., 2015).

Shelf life measured as the number of days when fruit weight loss is lower than 10% limit, all fruits from different cvs and harvests withstand 4 days storage, except ‘Alexandra’ fruit harvested in July 13. All Ca treatments decreased the rate of weight loss (except ‘Coraline’ Ca thiosulfate treated fruit of the last harvest). The threshold of 8 days storage was reached for almost all cvs first harvest, however in the last harvest only ‘Coraline’ and ‘Rome Star’ fruits maintained acceptable quality. The effect of Ca treatments was also noticeable after 8 days storage; almost all Ca applications decreased the rate of weight loss, except for Ca thiosulfate treated fruit of ‘Alexandra’ and ‘Rome Star’ of the first harvest.

Decay incidence was consistently reduced by Ca application for all peach cvs, mostly for the first harvest, relatively to the second one. Decay incidence rate was higher in the late harvested stored fruit, probably due to higher seasonal ambient temperatures during storage. In laboratory work, it was shown that some calcium salts reduced growth of Monilinia fructicola by approximately 65% compared with the control, and inhibited fungal polygalacturonase activity (Biggs et al., 1997).

Applications of Ca also reduced the number of fruit with split pit (data not given), averaged across all cultivars Ca chloride treatment resulted in the least rate, i.e. 2.97% while the other treatments recorded lower rate, 3.90 and 4.53% for Ca thiosulfate and Ca oxide, respectively compared to control (5.15%).

Irfan A., Nadeem A. A. and Ishfaq A. H. (2014). Physiological response and quality attributes of peach