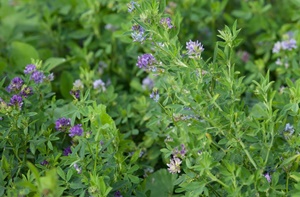 The recommended seeding rate of alfalfa is about 100 pounds per fedan (4200 m2) pure live seed. This study aimed to determine the optimum alfalfa-seeding rate and sowing method to enhance plant density. A split plot arrangement using randomized complete block with three replications was used to execute the experiment. Alfalfa forage related trait included stand density during a 12 month period after sowing. Results indicated significant differences between sowing methods in terms of plant density of alfalfa. Flat sowing gave on average a density of 143 plants per square meter during the 12 months period when compared to ridges and raised beds. Increasing seeding rates up to 150 gram led to an increase in plant density. The sowing rate of 150 grams produced an average of 165 plants per meter square during the 12 months period in comparison to 88 and 145 obtained by seeding rates of 50 and 75 grams, respectively.

Alfalfa (Medicago sativa L.) is one of the world’s most widely grown perennial forages mainly due to its high forage yield and nutritive value. Similar to other crops, efficient stand establishment is key to alfalfa production, where planting methods and sowing rate plays a key role.

Alfalfa is considered the main irrigated forages of high importance in Sudan. The crop is grown mainly in Northern State of Sudan where climatic conditions are favorable. The area under alfalfa production in Sudan is estimated at 52521 hectares and yield of the crop is relatively low (Abu Swar, 2004). Sowing methods have effects on the establishment of the crop, different sowing methods result in alfalfa stands of different quantity and quality (Fadul, 2011). Abdalla and Elfatih (2013) reported that sowing alfalfa on flat plots significantly increased plant density, forage fresh and dry yields compare to growing the crop on ridges. The sowing rate for alfalfa can vary depending on factors such as location, climate, soil type, seedbed preparation, tillage, method of establishment and seed cost (Bolger and Meyer, 1983).

Seeding rates of 15 to 20 kg ha-1 are recommended on seedbeds that are well prepared and when sprinkler irrigation is available (Suttie, 2000). An increase in alfalfa plant density is associated with increased seeding rate (Dhont et al., 2004; Abu Swar and Drrag, 2002). The recommended seeding rate of alfalfa in the Northern State of Sudan is about 100-pounds pure live seed per fedan but farmers use high seeding rates with very high cost. In addition, high terraces soil (Aridsol) need special techniques and methods for sowing. Therefore, this study aim is to determine the optimum alfalfa planting method and seeding rate to enhance plant density.

A field experiment was carried out in 2018-1019 season at the Demonstration Farm of the Faculty of Agricultural Sciences, University of Dongola, El Seleim village, located on the east bank of the river Nile across Dongola city-Northern State of the Sudan (Latitude 19˚ 11˝ N and Longitude 30˚ 29˝ E and altitude 227 m ASL). The Northern State occupies the distant northern part of Sudan, where desert climate is prevailing with extremely high temperatures in summer and low in winter. The soil of this experiment (terraces soil) is a sandy loam with 72% sand, 11% silt and 7% clay with an alkaline pH of 7.4. The field was divided into three blocks (replications), each with 9 equal plots of 3m x 4m size. All sowings were made by hand as broadcast. Plant density counts were taken in a fixed quadrat of one m2 from the middle of each plot.

A split plot arrangement using randomized complete block design was used to layout the experiment, where sowing methods (ridges, flats and raised beds) was assigned to the main plot and the seeding rates (50, 75 and 150 grams) in the sub-plot.

Treatment mean separation were determined by F-protected least significant differences (LSD) comparisons at the p ≤ 0.05-probability level as described by Gomez and Gomez (1984). Analysis of variance and mean comparisons were conducted using the Procedure of MSTAT software.

There were significant differences between sowing methods in plant density of alfalfa on most sampling dates except 120, 180 and 360 days after sowing (Table 1). The results indicated that flat sowing increased alfalfa plant density significantly when compared to ridge and raised bed sowing. Higher plant density per meter square (143) was recorded on flats whereas the lowest one (127) was obtained on ridge sowing. Increasing of plant density on flats maybe attributed to higher efficiency of plants sown on flats in utilization of resources. Hall et al., (2012), Glaspie et al. (2011), Abdalla and Elfatih (2013) reported similar results.

Significant differences between alfalfa seeding rates on plant density where found on most sampling dates with the exception of 180 days after sowing. The increase in seeding rate led to increases in alfalfa planting density (Table 2). Seeding rate of 150 gram/plot produced significantly higher plant density (165 plants per meter square) whereas the lowest plant density per meter square (88) was produced in alfalfa seed rate 50 gram per plot. The decrease of plant density due to seeding rate may be attributed to inability of plants to compensate the loss of plants during favorable environmental conditions. This result is line with Cooper et al., (1979), Stout (1998) and Glaspie et al., (2011) who reported higher plant densities of alfalfa with higher sowing rates.

In this study, alfalfa stand density performed better on flats compare to ridges and raised beds sowing. Average plant density per meter square during the 12 months was 143, 130 and 127 for flats, raised beds and ridges, respectively. Plant density increased with increasing seeding rate up to 150 gram/plot. Average of plants seeding rates during the 12 months was 165, 145 and 88 respectively for 150, 75 and 15 grams.

Abusuwar A.O. (2004) Technologies of Production and Preservation of Alfalfa. University of Khartoum Printing Press (in Arabic).