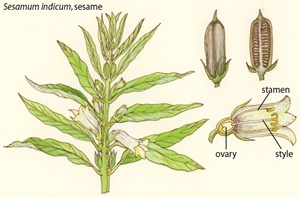 Sesame is one of the important oil crops in Egypt and the world due to its high nutritional value for humans. Its old presence on the agricultural map in Egypt, makes it necessary to move towards improving its yield to align with the high population increase. One of the requirements for genetic improvement is the existence of genetic variation among the members of the population. In this regard, genetic variation between sesame genotypes was found in a study of Anbanandan (2018) and Bhuiyan et al., (2019). An effective selection criterion is the highest broad-sense heritability coupled with genetic advance as percent of mean. The results of the application for this rule indicated that all studied traits in the study of Anbanandan (2018), seed yield followed by capsule plant-1 in the study of Bhuiyan et al., (2019) and hundred seed weight followed by days to 80% maturity, capsules per plant and number of branches per plant in the study of Sultana et al., (2019) are considered effective in improving seed yield per plant. Moreover, among selection criteria to improve seed yield per plant is estimation of correlation and path analyses at phenotypic and genotypic levels. In this regard, genotypic correlation of seed yield per plant with days to 50% flowering, plant height and number of capsules per plant at both the genotypic and phenotypic level was positive and significant. Abd EL-Satar et al., (2016), Teilep et al., (2018) and Pavani et al., (2020) recorded high heritability combined with high genetic advance for days to 50 per cent flowering, number of branches per plant, plant height to first capsule, plant height, number of capsules/plant and seed index. They added that high heritability combined with high genetic advance for these traits, indicated that additive gene action of high magnitude and phenotypic selection could be effective for improving these characters.

Analysis of variance for each environment according to Gomez and Gomez (1984) was done using randomized block design with three replications for all studied traits. For combined analysis of variance across three environments was done after confirmation of homogenous for all studied traits using Bartlett’s test according to Snedecor and Cochran (1989). Genotypic and phenotypic coefficients of variation (Burton and DeVane 1953), estimate of broad sense heritability (H2b) (Hansen et al.,1956), genetic advance as percent of the mean (Johnson et al.,1955), phenotypic and genotypic correlation coefficient (Weber and Moorthy 1952), phenotypic and genotypic path analysis (Dewey and Lu, 1959).

The considerable variation was detected between evaluated environments for all studied traits, as they had valuable differences in edaphic and climatic conditions (Table 3). Hence, these environments had considerable effects on performance of all evaluated sesame genotypes for all studied traits (Table 4). Across evaluated sesame genotypes (Table 4), in this regard, the earliest sesame genotypes in flowering were detected at E1 (52.6 day), the shortest plants in height at E2 (168.4 cm), the longest plants in fruiting zone at E2 (89.0 cm), more branches plant-1 at E3 (5.35 branch), the longest capsules per plant at E3 (3.20 cm), the heaviest weight of 1000-seed at E3 (4.52 g), the heaviest weight of seed per plant at E3 (42.0 g), the highest proportion of seed oil at E3 (47.7 %) and the highest seed yield per feddan at E3 (829.0 kg).

Sesame genotypes effects and their interaction with environments

To be able to determine the selection traits to improve seed weight per plant, it is necessary to identify the relationship between seed yield per plant as a dependent variable and its related traits as independent variables. In this regard (Table 8), seed weight per plant was associated with a positive and highly significant relationship with days to 50% flowering, plant height, fruiting zone length, number of branches per plant, capsules length and 1000-seed weight at phenotypic and genotypic levels. Hence, these traits can be taken as selection criteria to improve seed yield per plant of evaluated sesame genotypes. These selection criteria were positively correlated with each other and it reached the significant in many relationships. This indicates that improvement in one of these traits will be reflected in the remaining traits until it reaches seed yield per plant. These findings are confirmed by those of Roy and Pal (2019) and Umamaheswari et al. (2019) who indicated that number of branches/plant, number of capsule/plant, number of seeds/capsule and 100 seed weight were strongly related with sesame yield. Thus, selection of advance lines of sesame, that have higher seed yield, can be done on the basis of these traits. Moreover, these traits may be employed as the selection criteria for the betterment of sesame seed yield in future agricultural system. Similarly, Saravanan et al., (2020) indicated that yield per plant had a significant positive correlation with the number of capsules per plant followed by 1000 seed weight, plant height and the number of branches per plant.

The study revealed, in its entirety, that these evaluated sesame genotypes have considerable genetic variation, which gives the opportunity for effective selection within these genotypes. Moreover, efficiency of some studied traits i.e. days to 50% flowering, plant height, fruiting zone length and number of branches per plant in improving seed weight per plant, as they had the highest broad-sense heritability with genetic advance as percent of mean in addition to their significant association with it and its direct and indirect positive effect on it.