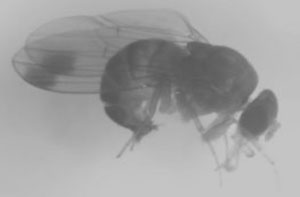 Spotted wing Drosophila Drosophila suzukii (Diptera: Drosophiladae) is an important invasive pest reported in the last few years in Europe. The female lays eggs preferably on soft fruits like cherries and others causing thereafter injury by development of rotting point. Red traps baited with apple cider vinegar, red wine and sugar were used to collect the D. suzukii adults. After preparation of slide mounting, the key identification was used to confirm presence of this pest in the north of Morocco. The dark spotted wings of male and sclerotized black and strong teeth on valve margin of female ovipositor were observed. Until early 2014, damages were not detected but the reviewing and updating of pest risk assessment should be implemented to prevent heavy economic losses.

Currently, the vast majority of Drosophila species, commonly known as vinegar flies, has become cosmopolitan species after colonizing new areas in the globe (Fernandez Iriarte et al., 2009) although most of them are not considered harmful pests as their larvae mostly develop in injured and rotting fruits. In contrast to these species, SWD exhibits a wide variety of host crops and ripening wild and cultivated fruits. Shortly before harvest, Drosophila suzukii lays its eggs in ripening fruits such as cherries, strawberries, blueberries, raspberries, blackberries, apricots, peaches, grapes and a number of wild fruits. Therefore, healthy unwounded fruits are favored to overripe ones (Mitsui et al., 2006). The Drosophila suzukii hence causes important economic losses (Lee et al., 2011; Walsh et al., 2011; De Ros et al., 2013). Females are exceptionally fecund (400 eggs/female), the life cycle from egg hatching to adult emergence ranges from about 9-10 days to 21-25 days respectively at 25° and 15°C, and hence from 7 to 13 generations can carry out per year (Kanzawa, 1939).

Drosophila suzukii adults are brown-yellow small (<4 mm) flies with red eyes. The abdominal segments possess unbroken dark stripes and the last segment is often dark. Males and females can be distinguished by their sexual dimorphism (Pfeiffer et al., 2012). Males possess a single dark spot on the leading edge of each wing. On the first and second segments of their front legs, males also exhibit two black combs with 3 to 6 teeth parallel to the length of the legs. In contrast, females are deprived of these characteristics but possess a large serrated ovipositor that they use to lacerate the fruit skin. Eggs, larvae and pupae are difficult to identify due to their similarities with other species (Cini et al., 2012).

On June, 2013, a single male of the SWD, was captured accidently in yellow sticky traps in Moulay Bousselham, Kenitra Province (Morocco).

Subsequently in October, red traps were placed in a raspberry orchard; each trap consists of a plastic container, baited with 150 ml of apple cider vinegar, 50 ml of red wine and one spoon of sugar, with small holes of 4 mm diameter allowing the entrance of the attracted flies (Grassi and Maistri, 2013). Twenty adults of SWD (male and female) were collected and subjected to identification using dichotomous key for identification of Drosophila suzukii (Hauser, 2011; Vlach, 2012) at the plant protection laboratory of Regional Center of INRA (Institut National de la Recherche Agronomique) in Agadir-Morocco and a voucher specimen is taken in the same laboratory.

The SWD male can be recognized based on the spots in their wing (Figure 1).The female posses a long and narrow ovipositor with sclerotized black teeth (Figure 2 and Figure 3).

SWD may be introduced to Moroccan fields as adult flies associated with fruit, or as eggs, larvae or pupae within fruit. Indeed, the proximity of Morocco to Spanish coast (about 14 km) and the occurring of an intensive international trade between Morocco and Europe could be a rationale.

Unlike most other members of the Drosophilidae family, this highly fecund species (7 to 13 eggs per day, Kanzawa 1939) is able to infect healthy ripening fruit instead of overripe and rotting fruit. D. suzukii can lay eggs on healthy soft bodied fruit and can even attack hard fruit crops such as peaches, apples and pears (Walsh et al., 2011). After infestation, secondary parasites and invaders often contribute to fruit deterioration. These facts make SWD an economically serious pest that needs management at highest level possible.

Because this pest is widespread in the world as it occurs in North America, Europe and Asia, it is considered non-actionable; meaning international trade restrictions or quarantines will be implemented.

Trapping is highly required for the early detection and management of D. suzukii. Mass trapping is less costly tool and easy to perform compared to other methods of control. An early detection of this potential pest is decisive for good management of host crops and monitoring effort is necessary to control the probable further expansion and/or establishment of this species in new areas in the country. The local quarantine measures are worth considering. Until early 2014, damages were not detected but the reviewing and updating of pest risk assessment should be implemented to prevent heavy economic losses.

Hauser M. (2011). A historic account of the invasion of Drosophila suzukii (Matsumura) (Diptera: Drosophilidae) in the continental United States, with remarks on their identification. Pest Manag. Sci., 67: 1352-1357.