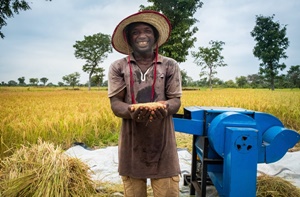 This research empirically determined the cost efficiency of the farmers that participated in the IFAD/VCD programme in Niger State of Nigeria. The study elicited cross-sectional data of 2018 cropping season from a structured questionnaire complemented with interview schedule from a sample size of 110 respondents selected through a multi-stage sampling technique. The sampled data were analyzed using the stochastic cost frontier model. The empirical evidence showed that none of the farmers were on the cost frontier surface i.e. inability to attain optimal minimum cost in the cultivation of rice in the studied area. The identified significant idiosyncratic variables militating against cost efficiency were poor health status of the farm family, which led to extra cost incurred in labor substitution and diseconomies of scale due to their small-scale mode of operation. Therefore, the study recommends that the policy makers should sensitize the farmers on the importance of health preventive measures and should endeavor to improve on the existing basic health centers in both human capital and logistics. In addition, the farmers should be encouraged to explore co-operative marketing so as to take advantage of bulk discount in input purchase and have bargaining power in marketing of their output, thus tackling the problem of diseconomies of scale in their farm operations.

Farming in Nigeria has been on the subsistence scale given that the bulk of the producers are resource-poor. The most viable chance of breaking the vicious cycle of poverty affecting these farmers is to transit them to a sustainable farming system. The imperfection in the markets has made it difficult for these resource-poor farmers to keep-up with the going concern of their firm enterprises, thus worsening their livelihood and food security of the studied area in particular and the country in general.

The essence of the IFAD-VCD programme is to secure the livelihood of the rural populace particularly the weaker section so that they can break the vicious cycle of poverty. The feasibility of Nigeria’s economic growth and development depends largely on empowering the rural poor communities viz. identification of their needs and implementation of broad based agricultural and rural development initiatives. The failure to sustain most of the agricultural projects in the studied area is not due to lack of interest of the target groups in farming but rather poor productivity of capital investment which is not remunerative to sustain the livelihood of the beneficiaries more less the business going concern. The rationality of any farmer in enterprise allocation solely lies on the cost of production which is a function of the market prices of inputs and outputs, a condition which the farmers have little or no control over. Thus, the business concern of a farmer to continue or pull-out from the business of crop farming depends on cost.

For the study area to achieve rice food security and alleviate poverty which is the goal of the programme, it is important to identify the factors that affect farmers’ cost efficiency in rice production and further measure the extent to which they limit the cost efficiency of the decision units. In view of the foregoing, this research was conceptualized with the aim of having a clearer understanding of cost efficiency and the feasibility of predicting the allocative efficiency of the target groups in the studied area.

Therefore, for the IFAD programme not to be a fail project, it becomes very imperative to determine the cost efficiency status of the farmers participating in the programme in Niger State of Nigeria using the parametric cost frontier model. Ogundari et al.(2006); Paudel and Matsuoka (2009); and Sadiq and Singh (2016) have opined that improvement in the understanding of farmers’ status of cost efficiency and its interlink with their idiosyncratic covariates would greatly assist policymakers in promulgating efficiency enhancing policies as well as judging the efficiency of the current and previous reforms.

Niger State is located in Nigeria a sub of Africa continent and it lies between latitudes 8°20’N and 11°30’N of the equator and longitudes 3°30’E and 7°20’E of the Greenwich Meridian time. The vegetation of the state is northern guinea savannah with sparse of southern guinea savannah around Mokwa Local Government Area (LGA). Agriculture is the major occupation in the study area and it’s complemented with civil service jobs, artisanal, craftwork, Ayurveda medicines and petty trade. The study made use of a multi-stage sampling technique to draw a sample of 110 active participants in the programme. In the state, the programme is currently mounted in five (5) LGAs with Agricultural Zone A (Bida) and C (Kontagora) having two LGAs each namely Bida and Katcha; and, Wushishi and Kontagora, respectively, while Zone B has one participating LGA viz. Shiroro. In the first stage, Katcha was randomly selected from Zone A while Shiroro LGA was automatically selected being the only participating LGA in Zone B. Wushishi LGA due to its comparative advantage in rice production throughout the year, owing to the presence of Tungan Kawo irrigation dam, was purposively selected from the Agricultural Zone C. In the second stage, two villages were randomly selected from each of the chosen LGAs. Thereafter, two active co-operative associations from each of the selected villages were randomly selected. It is worth to note that Microsoft excel inbuilt random sampling mechanism was used for the random selections of the villages and the co-operative associations. In the last stage, using the sampling frame obtained from IFAD/VCD office (Table 1), the Cochran’s formula was used to determine the representative sample size. Thus, a total of 110 active rice farmers form the sample size for the study. A structured questionnaire complemented with interview schedule was used to elicit information from the respondents during the 2018 cropping season, and stochastic cost frontier model was used to analyze the collected data. The Cochran’s formula used is shown below:

p = proportion of population with a particular characteristic

Pi = Vector prices of the actual jth inputs used by the ith farmer;

Yi = Vector of the actual jth output of the ith farmer;

βi = Parameter to be estimated;

Vi = Uncertainty which is beyond the control of the ith farmer; and,

Ui =Risk which is attributed to the error of the ith farmer;

Given the level of technology at the disposal of a technical unit, the cost efficiency is expressed as the ratio of the observed cost to the corresponding minimum cost (Cmin), and it is given below:

The inefficiency model is:

A cursory review of the maximum likelihood estimates (MLE) of the stochastic cost frontier function showed the variance parameters viz. sigma and gamma (0.8631) to be different from zero at 10% degree of freedom. The implication of the significance of the sigma-squared and gamma indicate the goodness of fit of the specified SCF and the correctness of the composite error term; and the presence of the cost inefficiency, respectively. Therefore, it can be inferred that the differences in the cost efficiencies of the sampled farmers accounted for 86.3% variation in the total cost (Table 2).

In addition, the calculated log-likelihood ratio test being greater than the tabulated Chi2 indicates the presence of one-sided error, thus an indication that the traditional response function (OLS) cannot fit the data (Table 3).

Furthermore, with the exception of seed price, all the parameter estimates (capital and labour costs) induced monotonicity in the cost function as evident by the positive sign associated with their coefficients (Table 2). The non-monotonicity of the seed price coefficient is an indication of congestion in the use of seed input which owes to the provision of subsidy, thus the negative sign associated with the seed price coefficient. The empirical evidence showed that the total cost incurred in the production of rice was influenced by seed cost, costs of agrochemicals, rental cost and rice output as indicated by their respective probability levels which were different from zero at 10% degree of freedom.

The negative significance of the seed cost coefficient implied that improved rice seed varieties were sold to the farmers at subsidized price, thus the non-monotonicity of the total cost despite increase in the seed cost. The elasticity of the significant parameter estimates viz. NPK fertilizer cost, urea fertilizer cost, herbicides cost, rental fees and output (kg) being positive implies that the total cost increase monotonically with an increase in the prices of these inputs and the only output parameter included in the SFC. Thus, a percent increase in the prices of NPK fertilizer, urea fertilizer, herbicides and land rental fee each would increase the total cost of production by 33.4%, 43.2 %, 36.6 % and 29.5 %, respectively. Besides, a percent increase in the output level of rice would increase the total cost by 35.9 %. The non-significance of the human labour and depreciation on capital items implied that the farmers relied on excess available family labour which is free of cost and incurred negligible costs on the fixed capital as they used primitive implements in the production of rice.

It was observed that the farmers despite operating in the rational stage i.e. decreasing return to scale they were experiencing diseconomies of scale as indicated by the economies of scale (ES) index of -3.84. This did not come as a surprise as these farmers are resource-poor who cultivate rice on small-scale basis, thus an increase in the output will increase the cost of production. This finding is contrary to the Schultz’s efficient hypothesis for poor farmers, that in their resource allocation behavior under traditional agricultural setting they are efficient giving the available technology at their disposal (Schultz, 1964; Ogundari et al., 2006; Sadiq and Singh, 2015).

Furthermore, it was observed that cost efficiency is influenced by sickness of household member, household size, farm size and number of language spoken as evident from their respective parameter estimates which were different from zero at 10% degree of freedom. The positive significance of the coefficient for sickness of household member implied that a farmer with health challenge affecting his household incurred extra labour cost due to substitution of family labour with hired labour, thus affecting the cost efficiency of the farmer. Thus, a farm family having a sick fellow will have his/her cost inefficiency increased by 0.214%. The negative significance of the household size coefficient implied that farmers with large household size composed of able-bodied people incurred less cost on labour due to access to free labour, thus an increase in their cost efficiency, Thus, a unit increase in the farm family household size by one person would lead to a decrease in his/her cost inefficiency by 0.075%. The positive significance of the farm size revealed that farmers with large farm size experienced diseconomies of scale, thus affecting their cost efficiency. Therefore, the implication of a unit increase in the farm size by one hectare would lead to an increase in cost inefficiency by 1.65%. The negative significance of the parameter estimates for language spoken implied that farmers who understand or speak more than one lingua had access to information concerning innovative and appropriate practices of allocation of farm inputs, thus making them more cost efficiency than their counterpart who understands only one language. Thus, the tendency of a farmer to speak more than one language would increase his/her cost efficiency by 0.469%.

From the foregoing findings, it can be inferred that the farmers were not efficient in minimizing their farm costs which was largely due to health challenge of the farm family and diseconomies of scale which owed to their mode of operation i.e. small-scale holdings. Furthermore, all the sampled farms experienced cost wastage relative to the best practiced farm producing the same output using the same available technology in the studied area. Therefore, it was recommended that both public and private institutions should sensitize the farmers on the importance of health preventive measures, improvise basic health centres with adequate staffing of health personnel, and affordable and subsidized medications. In addition, the farmers should be enlighten on the importance of social capital viz. co-operative marketing in order to benefit from pecuniary advantages, thus addressing the problem of diseconomies of scale.

Paudel, P. and Matsuoka, A.(2009). Cost efficiency estimates of maize production in Nepal: A case study of the Chitwan District. Agricultural Economics-Czech, 55: 139-148.