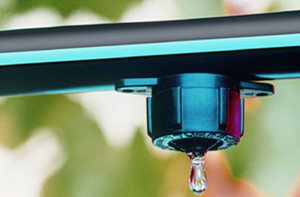 Comparative study of the hydraulic, energy and agronomic performances of conventional and low pressure drip irrigation on citrus

In countries facing water scarcity, drip irrigation can raise crop productivity and save water compared to flood irrigation. In spite of its benefits, the adoption of drip irrigation is still low mainly due to the high cost of investment and the energy cost of operation. For this latter constraint, new types of drippers operating at low pressure are being tested. The present study aims to compare the performances of two types of drippers, represented by conventional drippers (CD) operating at nominal pressure of one bar and the new drippers (LP) operating at a pressure of 0.15 bars. The study was carried out in a citrus grove in Tadla, Morocco. Results showed that low pressure emitters reduced hydraulic energy per unit volume of water supplied by around 43% compared to conventional emitters, without significant reduction in water distribution uniformity. Low pressure drippers had uniformities of 80 to 92%, compared to 88 to 97% for conventional drippers. Citrus growth parameters, fruit yield and the fruit quality of the Maroc late variety were identical under the two types of drippers. Thus, low pressure emitters can be used as a substitute for conventional drippers which require higher energy.

In areas with arid to semi-arid climates such as the irrigated perimeter of Tadla in Morocco, surface water resources are becoming increasingly scarce and groundwater is often overexploited. These water resources are also of lower quality due to their degree of salinity which continues to increase over the years. Saving water and preserving it has therefore become an imperative for the sustainability of production systems. While the Green Morocco Plan launched in 2008 made it possible to double or even triple the areas occupied by certain crops grown, it further amplified the imbalance between water availability and demand in most production basins. As a result, irrigated agriculture is called upon more than ever to produce more with less water.

In addition, the energy bill constitutes a significant cost for most farms. For this type of farm, the use of the low pressure irrigation system, possibly combined with the use of solar energy, is a promising strategy according to the results obtained in other countries with similar climates. However, there is a lack of research on the performance of low pressure system compared to conventional drip irrigation. The objective of this study is to assess the performance of low pressure system compared to that of widely used conventional drip irrigation in Tadla irrigation scheme.

The experiment was carried out on citrus, the main fruit tree in the region, at the Afourer experimental station of INRA Tadla during two growing seasons. The “Maroc late” variety orchard (1.5 ha) has been divided into two identical irrigation sectors. In a first sector, the drippers used are the PC Junior type or conventional emitters (CD) with a nominal flow rate of 8 l/h at a pressure of 1 bar. The other sector is equipped with low-pressure drippers (LP) delivering a nominal flow rate of 8 l/h but at a low pressure of around 0.15 bar. At the head station, in addition to filtration equipment and fertilizer application pumps, meters and manometers were installed to control flow rates and operating pressure.

At the entrance to each irrigation sector, flow and pressure adjustment equipment has been installed with the aim of ensuring the pressure and flow conditions necessary for the operation of the two types of drippers. Flow and pressure sensors are installed at the entrance to continuously record data over time during each irrigation event. Other pressure sensors are mounted on laterals for the same objective.

Irrigation is carried out by providing the water requirements calculated using climatic data of the experimental station and the crop coefficients (Kc) determined in a previous study (Bouazzama, 2008). Observations on the irrigation equipment are carried out every two weeks and include the flow rates of drippers at 16 points distributed according to method suggested by Karmali and Keller (1976), the pressure in upstream and downstream of four laterals uniformly distributed on each irrigation sector and dripper clogging assessment.

The measured values of flow rates and pressures are used for calculation of the performance indicators such relative flow rate of the dripper (R), percentage of completely clogged drippers (Pclog) and uniformity of distribution (DU). By comparing the volumes of water applied to the water requirements of the citrus variety studied, it is possible to assess the level of satisfaction of the water requirements. Distribution uniformity is calculated according to the equation:

In parallel with the application of the irrigation regimes, at the level of each irrigation sector ten spring shoots are chosen and marked in March. The shoots are subject to measurement of the flowering rate, fruit setting rate and the rate of fruit drop. At the beginning of July, ten fruits are also chosen to record the evolution of their diameters. Maturity observations focused on fruit weight per tree (yield) and the distribution of fruit into size classes. The juice and citric acid contents are also measured in the laboratory. The distribution of fruit sizes after harvest is carried out according to the commercial classification.

The results obtained show that Pclog calculated at the end of the second growing season is relatively higher for classical drippers (CD) with the value of 5.31 against 4.23% in the case of low pressure system. Reducing the operating pressure to values between 0.5 and 0.65 bar in irrigation sector equipped with CD drippers increases the risk of clogging mainly at the end of each laterals. The decrease in pressure reduces the flow speed which favours the accumulation of impurities. However, the obstructions observed in the LP drippers are mainly due to the intrusions of insects and ants. It can also be seen that where more drippers were replaced had an average flow rate per dripper exceeding 8 l/h. This can be explained by the leaks that accompany the replacement of the drippers. This is in contradiction to the results of Trooien et al. (2000) and Liu and Huang (2009) who found that higher flow drippers are less clogged than those with lower flow. Values indicated in table 2 show that LP drippers have relatively high flow rates and exceed the nominal value of 8 l/h. Likewise, the ratio R confirms this trend since its value exceeds 1 for LP drippers.

According to table 2 and classification system given in table 1, values water distribution uniformity are excellent for CD drippers (97%) and remains good for LP drippers (89%). However, there is an improvement in the latter compared to the previous year. The evolution of this indicator over time (Figure 1) shows that the distribution of water remains more uniform in the sector equipped by CD.

The evapotranspiration of “Maroc late” citrus variety was calculated for each phenological stage from the ET0 values and crop coefficients (Kc) determined for the same genotype in previous study (Bouazzama, 2008). Throughout the year, water requirements of the “Maroc late” variety are 1073 mm. The analysis of the importance of the requirements by phenological phase shows that the summer fruit growth consumes more than 55% of the total requirements. This stage is followed by the phase of physiological fall which requires more than 20% of the total water needs. Figure 2 shows the cumulative change in water requirements (ETc) and water supplies (irrigation + rain) applied in sectors equipped with LP and CD drippers.

Analysis of the graph shows that the trees irrigated by the LP drippers received more water than needed. The application of water in the sector equipped with a traditional dripper are correct and make it possible to meet the needs exactly. Total application reached at the end of June which coincides with the harvest date are 1662 and 1360 mm for the sector equipped with LP and CD respectively. In comparison to the water requirements over the same period estimated as 1185 mm, the excess water is 42 and 23% for LP and CD emitters respectively.

According to results summarizes in table 3, plots operating with low-pressure emitters required significantly less hydraulic energy per volume of water delivered than plots with conventional emitters. Data showed that the use of emitters with low activation pressure led to a reduction in specific hydraulic energy of 44% per plot on average.

The monitoring and checking operation of the drippers is made regularly at every irrigation event. The objective is to assess the state of clogging of the drippers and fix, if possible, the partially or totally clogged drippers. With regard to completely clogged drippers, disassembly of the dripper shows that the clogging is due either to the presence of two membranes (manufacturing defect) or to the presence of impurities at the water entry point. The emitters whose flow rates are judged to be visually low are dismantled to eliminate impurities and especially to find out the causes of clogging. In most of these drippers, the clogging is mainly of biological origin by the presence of ants and/or insect larvae. In rare cases, algae filaments have been found. Adult ants or colony larvae have been encountered.

During the 2nd year, the type of dripper factor which resulted in different water supplies and uniformity of distribution affected the citrus physiological parameters. The flowering rate is statically equal between the two types of drippers since the irrigation was interrupted during the rainy period between December 2017 and March 2018. The values ​​measured were 0.86 and 0.85 under LP and CD respectively. Fruit set was slight favoured by water stress and showed significantly different values ​​between the two types of drippers. The values ​​obtained were 0.80 and 0.77 under the CD and LP drippers respectively. The physiological fruit drop, although a natural phenomenon, was accentuated by water stress. The differences were significant although the sector under CD drippers received adequate amounts of water with recorded a fruit drop rate of 0.26. Under LP drippers, the percentage of fruit drop was 0.23. These results confirm those obtained by Hilgeman (1977) in Arizona (USA) who showed that water stress during physiological fruit drop reduces the number of fruits per tree.

According to figure 3, the average monthly increase in fruit diameter is 5.57 and 5.24 mm for sectors equipped with LP and CD respectively.

The differences between the yields, as fruit weight per tree, were significant under the two types of drippers with average values ​​per tree of 128 and 119 kg / tree under LP and CD drippers respectively. As for the distribution of fruit sizes, this parameter illustrates the variability of water distribution in the two sectors. Indeed, according to the table, we see a representation of all commercial caliber classes in LP sector while the fruits harvested under the CD drippers are relatively uniform in size. Calculation of water use efficiency, as yield divided by irrigation water applied, showed that CD drippers make better use of water with values 1.63 and 1.86 kg/m3 for LP and CD respectively.

Regarding the fruit juice content, the average values ​​obtained are 52.8 and 51.7% for the fruits from trees irrigated by the CD and LP drippers respectively. Analysis of the results shows that a significant difference between the two types of drippers is insignificant (5%). The recorded contents are higher than the normal level of Maroc late variety which is 46% (INRA, 1968). As for the citric acid content, the average values ​​obtained are 1.03% under the CD drippers and 1.07% on the LP side. These results clearly show the increase in juice content and the decrease in acidity by increasing water intake.

From the results obtained, it appears that the performance indicators are better for the sector equipped with traditional drippers (CD). The sensitivity of LP drippers to biological clogging, mainly by insect larva, has greatly affected the uniformity of water distribution. Likewise, the average flow rates of these drippers are higher compared to the nominal flow rate. This is through inflows of water far exceeding crop water requirement. The heterogeneity of water distribution induced variability in yield per tree as well as the distribution of fruit sizes. An economic analysis will show the comparative advantage of this type of dripper compared to traditional ones which ensure more uniformity of applied water.