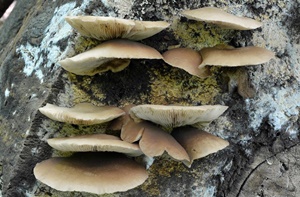 Inocybaceae and affiliated taxa reported in West Africa were examined through a survey of available publications coupled with field data collections. Twenty-eight Inocyboid taxa have been reported in the region, including six species validly described in the genera Inocybe, Inosperma and Mallocybe. All taxonomic names have been confirmed in Index Fungorum (http://www.indexfungorum.org/names/names.asp). Among them, four taxa were synonyms of other species of Inocybaceae, Crepidotaceae or Chromocyphellaceae. Consequently, only six taxa, Inocybe ghanaensis, Mallocybe africana, Inosperma africanum, I. bulbomarginatum, I. flavobrunneum and Pseudosperma squamatum make the diversity of Inocybaceae from West Africa. Here the distribution of known taxa has been reported along with checklist. In addition, results of BLAST searches including any potential environmental matches (>97%) similarity is reported.

Inocybaceae Julich, is monophyletic family and occurs worldwide. It encompasses about 1 050 species (Matheny et al., 2020). Species of Inocybaceae are found in forests (from woodland, gallery or dense forests), more rarely in grasslands, wetlands or agricultural lands (Ov, 2015). Most species of Inocybaceae are ectomycorrhizal and associate with 23 families of vascular plants (Matheny et al., 2020). Recently, Matheny et al. (2020) suggested a revised phylogeny for the family Inocybaceae. Thereafter, Inocybe, Inosperma (Kühner) Matheny & Esteve-Rav. and Mallocybe (Kuyper) Matheny & Esteve-Rav., are raised up to genera level. Nothocybe Matheny & K.P.D. Latha, too, has been established at the rank of a genus as Nothocybe whilst the former Inocybe sect. Rimosae (Fr.) Quél. has become the genus Pseudosperma Matheny & Esteve-Rav. Thus, according to Matheny et al. (2020), the family Inocybaceae now comprises seven genera.

Even being ectomycorrhizal, Inocybaceae is a sister family of Crepidotaceae (Matheny, 2005), that is exclusively a saprotrophic one. However, due to similarity and lack of molecular analyses, a large number of Inocybaceae species were classified in Cortinariaceae Singer (Horak, 1978; Singer, 1986, 1975). In the literature, most of the pre-molecular classifications merged not only Inocybaceae with affiliated taxa, Crepidotaceae, Tubariaceae Vizzini and Chromocyphellaceae Knudsen. The first taxonomic evaluation within Inocybaceae was based on morphological and microscopic characters for the distinction of genera earlier (Kuyper, 1986). Only relatively Jülich (1982) placed Inocybe (Fr.) Fr. in Inocybaceae together with the genus Astrosporina Schröt which is now known to be polyphyletic and nested within Inocybe (Matheny et al., 2002; Matheny, 2005). Historically, many taxonomic arrangements have been proposed for Inocybe (Matheny et al., 2002, 2020; Matheny, 2005).

Except some scarce publication (Aïgnon et al., 2021; Buyck and Eyssartier, 1999; Gardens, 2017; Matheny and Watling, 2004) taxonomic documentation of the family Inocybaceae from tropical Africa is scant. About 78 taxa of Inocybaceae were sampled from Africa. Inocybaceae are less studied in West Africa and most of species, though the diversity is high. Recent mycological prospections reported numerous specimens, among them new species to science (Aïgnon et al., 2021). Though taxonomic works are still progressing, it is of paramount importance to provide a state-of-art related to the divers known in West Africa, in order to establish a reference guide for detecting new species.

In this paper, we provide a checklist of known species of Inocybaceae and affiliated taxa from West Africa based on the literature, observation and field data collection between 2013 to 2018.

West Africa includes 10 West African countries. The data sets analyzed, along with sampling trips undertaken recently are from the different countries of West Africa as outline in figure 1.

The data were assembled from literature related to Inocybaceae from West Africa. All scientific names have been cross-checked against Index Fungorum (IF) and synonymous names have been separated.

A significant number of species of the Inocybaceae have been reported from West Africa. In addition, it is possible now to distinguish these families due to taxonomic revisions. Several synonyms could be reported from the literature for example, Crepidotus mollis f. minor Bres is synonymous with Crepidotus mollis (Schaeff.) Staude; Cyphellalilacina Massee and Cyphella variolosa Kalchbr are also synonymous names of Phaeosolenia inconspicua (Sacc.) Donk. Some taxa still hold invalid names such as Inocybe gbadjii which is invalid name due to lack of consequent publication. Table 1 summarizes the different species of Inocybaceae as well as the affiliated taxa of West Africa. The species are mainly collected in Caesalpinioideae DC dominated forests and seem to be associated remain in association with Afzelia africana Sm. ex Pers. and Afzelia bracteata T. Vogel ex Benth in gallery forests, semi-deciduous forests and woodlands.

Existing data show that Inocybaceae species and affiliated taxa have been reported from six countries from West Africa i.e., Sierra Leone, Nigeria, Ghana, Senegal, Benin and Nigeria. Recent investigations have shown that these species are mainly found in vegetations dominated by Isoberlinia doka Craib & Stapf, I. tomentosa (Harms) Craib & Stapf, Uapaca togoensis Pax, U. guineensis Müll. Arg., Monotes kerstingii Gilg and Berlinia grandiflora Hutch. & Dalziel. These plants are distributed in six countries of West African. At the 97% threshold, after BLAST searched at NCBI (www.blast.ncbi.nlm.nih.org), few species of Inocybe showed the resemblance with our species. These include the undescribed species from Zambia, Inocybe sp. PC96082, Inocybe sp. PC 96204 and Inocybe sp. PC 96013 which showed similarity with our West African collections.

The genera of family Inocybaceae are mostly ectomycorrhizal in nature. For example, Anthonotha crassifolia (Baill) J. Léonard and Uapaca chevaleri Beille are partner trees of some unidentified Inocybaceae species in the semi-deciduous forest of Senegal (Thoen and Ducousso, 1989), likewise for Afzelia bella Harms in the tropical forest of Nigeria (Redhead, 1968) and also Afzelia africana in wooded areas and gallery forest in Senegal (Thoen and Bâ, 1989). In addition, these ectomycorrhizal host trees are found in various vegetations such as Zambesian and Sudanian woodlands, semi-deciduous forests, Guineo-Congolean dense forests and gallery forests. The presence of Inocybaceae species in these vegetations is remarkable, and there is little doubt that other African species of Afzelia, Anthonatha and Uapaca are also ectomycorrhizal associated with Inocybe but it is difficult to confirm without consequent analysis.

Analysis of our recent collections have shown a wide distribution of Inocybaceae species in vegetations dominated by Uapaca spp., Isoberlinia spp., Berlinia grandiflora and Anthonotha crasifolia. These tree species are widely distributed in Benin, Burkina Faso, Guinea, and Senegal (Moyersoen and Fitter, 1999; Newbery and Stoll, 2013; Thoen and Ducousso, 1989).

The same is true for Monotes kerstingii often mixed with stands of Isoberlinia spp. (Sanon et al., 1997). The species of Inocybaceae have not been sufficiently evaluated in West Africa and so there is need to study the biology and distribution of these species to determine specific host trees for conservation interventions.

Kuyper T.W. (1986). A revision of the genus Inocybe in Europe I. Subgenus Inosperma and the smooth-spored species of subgenus Inocybe. Persoonia, 3: 1–247.