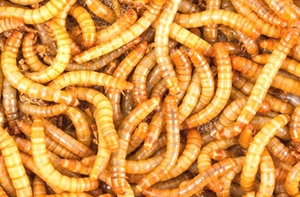 The yellow mealworm Tenebrio molitor (Coleoptera: Tenebrionidae) started recently to be used as a feed and food to replace traditional products. The optimization of mass rearing conditions and the choice of appropriate diets are the most important factors governing the production of these insects and secondary products. The aim of this study was to study the performance of T. molitor on six affordable animal feed diets (two different dairy cow feeds, calf starter feed, chick starter and grower feeds and wheat bran) in addition to a control diet based on wheat bran and starter feed for Chick (60:40 ratio). Larvae showed the highest mass gain and growth rate when fed on wheat bran only. The control and the wheat bran diets were the most consumed by T. molitor larvae, while the other feeds were less appreciated. Conversion and survival rates did not vary significantly between the diets. The results should be taken into consideration for large scale mass-rearing of T. molitor.

The world population is continuously increasing and so is the demand for protein alternatives for food and feed (Tilman et Clark, 2014). As a result, the world is under immense pressure to satisfy human nutritional needs (Stehfest et al., 2009). Animal farming pastures and animal feed crops account for more than two thirds of all arable lands (Steinfeld et al., 2006). Meat and other proteins from livestock, particularly cattle, are inefficient and require unsustainable costs and activities that are harmful to the environment (de Vries et de Boer, 2010). Insect-based sources of proteins and foods have been proposed to reduce the detrimental effect of meat processing activities on the ecosystem while satisfying population demand (Wegier et al., 2018). Insects show high levels of bioconversion of agricultural and food waste residues (Sun-Waterhouse et al., 2016) and therefore represent ideal sources of proteins to help improve protein conversion efficiency (van Huis, 2017).

There are more than 2000 edible species of insects worldwide, however, only a few are commercially produced (Jongema, 2015). Among them, the yellow mealworm Tenebrio molitor (Coleoptera: Tenebrionidae) along with other beetle species are the most consumed insect in the world (van Huis, 2016). The larvae of T. molitor are already used as pet food, providing promising alternative for animal feed (Finke, 2002; van Huis, 2013). Not only are mealworms suitable as animal feed, but also often considered suitable for human feed (Li et al., 2013, 2015).

Mealworms have a higher nutritional value than beef and chicken since they contain all essential amino acids (Rumpold et Schlüter, 2013). The yellow mealworm is already one of the most commonly industrially reared insect species in Europe (Bordiean et al., 2020; Caparros Megido et al., 2014; Sogari et al., 2019) . Mealworms are inexpensive, easy to rear and show much less harmful effects on the environment compared to farm animals (Wang et al., 2012). Many substrates from the agricultural, baking, and brewing industries can be converted by this species into biomass (Oonincx et al., 2015; van Broekhoven et al., 2015). This insect has undergone extensive research in order to validate its nutritious importance and susceptibility to toxic compounds (e.g. mycotoxins, pesticides, heavy metals) (Bordiean et al., 2020).

Yellow mealworms will most likely be used as food on a wide scale in the near future, either as a whole or just for certain compounds (chitin, fatty acids, amino acids, proteins) (Bordiean et al., 2020). Recent Regulation 2283/2015 and Regulation 2017/893 of the European Commission authorize the production of animal protein from insects (including yellow mealworm) for food and feed purposed in the European Union.

Nevertheless, to our knowledge, comparative studies evaluating a broad range of various feeding substrates that could be included in a mass rearing diet for T. molitor is rather limited. Data on T. molitor growth and performance on single-component diets could help improving our understanding of T. molitor nutritional requirements and aid in the formulation of appropriate diet mixtures for mass rearing of this important species.

In this context, the objective of the present study was to generate baseline information on the suitability of 7 affordable feeding substrates obtained locally for T. molitor larval development and survival rate

The initial population of Tenebrio molitor larva was provided by the International Foundation for Wildlife Conservation in April 2019, then mass-reared at the IAV-CHA entomology laboratory (Agadir, Morocco).

The mealworms were reared in six large plastic boxes (41 x 28 cm). Approximately 1148 fully matured adults (15±2 days) per box were placed in oviposition trays in order to have one adult per cm² and were fed ad libitum with wheat bran and supplied with fresh potato once every week. Insects were maintained in a controlled rearing chamber (28 ± 1 °C, 70 ± 5% RH, total darkness).

After 3 days, the eggs were collected using a large-mesh sieve that separates the adults from the substrate containing the eggs. The hatched larva used for the experiment were fed ad libitum with a diet prepared from wheat bran (60%) completed with chick starter feed as a source of protein (Table 1). Each 4 days, this diet was amended with a piece of fresh potato to provide water source for the insects. The larvae were maintained on this diet for 25 days before initiating the experiment. This procedure allowed the larvae to grow to a size enabling their easy and safe collection for the main experiment (feed conversion).

The experimental diet mixes were composed of (1) dairy cow feed 3L, (2) dairy cow feed 2L, (3) calf starter feed, (4) chick grower feed, (5) chick starter feed, (6) wheat bran and (7) a mix of 60 % wheat bran and 40 % chick starter feed used as a control feed (Table 1). The seven diets used in this experiment are animal feeds provided by ALF ISSEN company who specializes in manufacturing feed products for livestock farming. These diets were provided in granulated formulation and grinded with electric grain mill (velocity : 25000 RPM) to have similar size of substrate. The nutritional value of all the feeds was already determined by the providing company, including protein, humidity, fatty matter, cellulose, minerals, calcium and phosphorus content (Table 1)

Larvae were randomly selected from the plastic containers and then separated into 28 groups of 150 individuals each in Petri dishes (9 cm diameter). The larvae were starved for 24h before being weighed on a precision scale (SCALTEC SBA 32, 0.1 mg). They were then introduced in plastic boxes (10 x 15 x 9 cm) containing 150 g of each of the 7 diets.

The experimental design adopted was the Randomized Complete Block Design (RCBD). After a growing period of 40 days, the larval number, larval weight and the remaining substrate weight were assessed as followed:

The analysis shows a strong impact of diet on weight gain (GLM, χ_6,21^2=32.27, p<0.001; Figure 1). The feed that gave the highest gain in larval biomass was the wheat bran (4.64±0.26 g), followed by the control (3.87±0.2 g) which was based on wheat bran enriched with 40% of chick starter feed. The other feeds have a relatively average performance regarding weight gain. Calf starter feed was the least efficient diet.

According to results obtained in the current study, the feed that gave the larvae of Tenebrio molitor a higher capacity to accumulate biomass was the wheat bran diet. The control showed a relatively lower performance compared to wheat bran in weight gain due to the incorporation of 40 % compound feed (chick starter feed). This feed is very low in fiber content (as it is intended for poultry broiler that are monogastric) compared to the wheat bran-based diet (9 %). This explains why fibers are important in the yellow mealworm diet. The same result has been shown by (Li et al., 2015) who observed that T. molitor larvae fed on a diet containing 5-10% fibers reached optimal levels of growth, development and respiration in the later stages. However, it was found that the D2 diet (2L dairy cow feed), which has similar nutritional value as wheat bran, showed less performance compared to wheat bran. The contrasted growth could be due to the large difference in net energy value between both feeds (1500 kcal vs 3900 kcal).

In addition to that, the aerated structure of wheat bran compared to the powdered compound feed, which is very dense, reduces the larval movement. (Greenberg & Ar, 1996) reported that hyperoxic and normoxic larvae of T. molitor grow more than hypoxic larvae. Hypoxic conditions (10-10.5 % O2) inhibit growth rate, lead to the development of abnormalities and to a higher proportion of females in mealworm populations (Loudon, 1988). The D4 diet (chick grower feed) showed a high conversion rate due to its high protein content of 18.5% and fiber deficiency.

Our results show that both chick grower feed and wheat bran diets must be combined to have a balance in weight gain and conversion rate of mealworms.

As long as wheat bran remains the cheapest feed with a relatively minimal environmental impact compared to animal feeds that are made primarily from unsustainable products such as soybean meal, corn and fishmeal. A wheat bran-based diet with a low incorporation of the compound feed is recommended to enrich the advantage diet and to increase the conversion rate. However, trials to identify the incorporation rate are mandatory. The integration of qualitative aspects as a parameter to select the optimal food will widen the angle of reflection in this direction as well as studies of food safety and contamination risks of the diets.