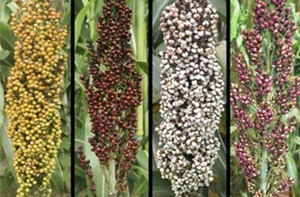 The objective of this study is to compare the genetic diversity of sweet grain sorghum with grain sorghum and sweet sorghum using qualitative agro-morphological traits in order to identify its phenotypical specific traits. Forty-two genotypes of the three types of sorghum were evaluated using a three-repeat Incomplete Fisher Block device using 15 qualitative characters. The results showed a lack of variability in ten sweet grain sorghum traits that resulted in zero Shannon-Weaver diversity indices. However, the type of panicle, the color of the grain, the cover of the grain, the appearance of the endosperm and the botanical race make it possible to clearly distinguish sweet grain sorghum from the other two cultivated sorghums. Indeed, sorghum sweet grain usually has a loose panicle, floury and red grains that are covered at most on 50% by glumes and often belongs to the caudatum breed. These results could be used in sorghum breeding program.

Climatic hazards exacerbated by climate change, has particularly contributed to weakening the current food situation of peasant populations, thus compromising numerous development initiatives in the Sahelian countries (FAO, 2006). Solving these problems requires, among other things, the diversification of agriculture through the use of all resources and the development of new sustainable production systems (Assogbado et al., 2009). One of the credible alternatives to respond effectively to the problem of food insecurity, is the use of under-exploited plants (FAO, 2009). These plants are known and used by farming communities on a small scale and are not generally promoted or included in agricultural statistics (FAO, 2009). These minor species which are at risk of disappearing, include sweet grain sorghum and sweet sorghum (Nebié et al., 2012; CIRAD, 2013).

In Burkina Faso, Sorghum [Sorghum bicolor (L.) Moench] is the second most important cereal crop after maize, with an estimated total production of 1,839,570 tonnes, including 1,425,103 tonnes of white sorghum and 414,467 tonnes of red sorghum (DGESS/MAAH, 2021). However, these statistics do not take into account all existing sorghum genetic resources. Indeed, next to grain sorghum, other types of sorghum with varying potential, such as sweet grain sorghum and sweet sorghum are also produced and used by farmers on a small scale (Nebié et al., 2012).

The agro-morphological assessment was carried out under rainfed conditions in 2020 at the experimental station of Rural Development Institute situated in “Gampéla’. This site is located in the northern Sudanese climatic zone with geographical coordinates of 12°25’ North latitude and 1°21’ West longitude. The soil is very heterogeneous, deep, of low chemical fertility and predominantly sandy loam texture with a pH of 5.69 (BUNASOL, 2019). In 2020, the station received 855 mm of rainfall over six months with a peak of 329 mm in August. During the July-October trial, the average monthly temperature ranged between 26°C and 28°C for a cumulative rainfall of 769 mm.

The experimental set-up was an incomplete Fisher block with three replications, each subdivided into three sub-blocks. Each sub-block consisted of 14 rows and 11 patches per row with row spacing of 0.8 m and patch spacing of 0.4 m. Each replication had 42 lines with one line per genotype and two border lines on either side. The distances between the replications and between the sub-blocks were respectively 2 m and 1 m for a total area of 504 m2.

The field was plowed with a tractor and leveled prior to planting, which took place on July 18, 2020. During the trial, one weeding and one stripping at a rate of one plant per bunch was performed 15 days after sowing, followed by two weeding on day 18 and day 35 after sowing, respectively. A ridging was then carried out towards the end of the vegetative development of the plants in order to counter the lodging caused by the violent winds. NPK fertilizer (14-23-14) was applied at each weeding at a rate of 50 kg/ha and urea at a rate of 50 kg/ha.

Each 𝐻’ value was divided by its maximum value (ln n) and normalized in order to keep the values between 0 and 1. The average diversity index ( ) over n traits by sorghum type was estimated as /n.

Figure 2 shows that of the three types of grown sorghums, only grain sorghum contains genotypes with negative or positive exertion of panicles and sweet sorghum contains genotypes with straight or curved stalks. For sweet grain sorghum, all genotypes have positive exertion of panicles with straight stalks. The greatest variability is recorded in panicle type with the presence of loose, compact or semi-compact panicles (Figure 3). However, sweet grain sorghum had only loose panicles, unlike the other two types, which also had compact and semi-compact panicles.

Low racial diversity is observed in sweet grain sorghum, which belongs to the race caudatum (95.5%) or the intermediate caudatum-guinea (Figure 6). The greatest racial diversity is found in sweet sorghum. It belongs to the main races bicolor (40%), caudatum (30%), durra (10%) and the intermediate race guinea-bicolor (20%). As for grain sorghum, only the main races guinea (90%) and caudatum (10%) were encountered.

A monomorphism was observed in several traits of sweet grain sorghum compared to grain sorghum and sweet sorghum where two and three traits respectively did not show variability. Indeed, the sweet grain sorghum genotypes are all anthocyaninized and have straight peduncles bearing well-cleared panicles that contain hairless glumes and mealy grains. Such monomorphism was also previously observed by Nebié et al. (2012) on sweet grain sorghum from north-central Burkina. However, these same characters were polymorphic in sweet sorghum (Nebié et al., 2013) and grain sorghum (Barro-Kondombo, 2010). Yet, the positive exertion of sweet grain sorghum panicles, which is a much sought-after trait in breeding, exposes the panicle less to mold and thus contributes to good grain quality. According to Dicko et al. (2005), the anthocyanin character, which is due to the presence of the phenolic compound 3-deoxyanthocyanidins, could confer on the varieties forms of resistance to biotic stresses. These genotypes would therefore have been consciously or unconsciously selected by producers, as Barro-Kondombo (2010) also found in grain sorghum in west-central Burkina Faso.

The low diversity observed in sweet grain sorghum for several traits is confirmed by the very low Shannon-Weaver diversity indices associated with them. Indeed, ten of the 15 traits showed zero diversity indices. However, in grain sorghum and sweet sorghum, it was two and three traits, respectively, that showed null diversity indices. Gashaw et al. (2016) reported for 16 studied qualitative traits of sugarcane, Shannon-Weaver diversity indices of 0.37 to 0.92. This low diversity recorded in sweet grain sorghum compared to grain sorghum and sweet stalk sorghum could be explained by a higher rate of allogamy within this type. Indeed, this sorghum, which is generally produced on a small scale in the hutches, has grains with little glume coverage and open (loose) panicles, which could then favor allogamy, resulting in a reduction in intra-type diversity. However, in sweet sorghum, Nebié (2014) reported the presence of sorghum with closed glumes, which would impose strict autogamy at the level of some genotypes.

The low phenotypic divergence observed between sweet grain sorghum and the other two types of sorghum grown in Burkina Faso in terms of certain quality traits (seedling color, glume appearance and dry grain flavor) could be explained by the production method. These three types are sometimes grown in association in farmers’ fields (Nebié et al., 2012), which would have favored cross-fertilization between types. Djè et al. (2004) and Barnaud et al. (2007) reported allogamy rates of 7% to 40% in sorghum. These results could also confirm their genetic proximity as reported by Tiendrébéogo (2020).

The great phenotypic divergence observed between sweet grain sorghum and the other two cultivated sorghums in terms of grain color, grain endosperm texture and botanical race could be related to their use. Sweet grain sorghum is a mouth sorghum and the grains are consumed directly fresh at the doughy stage (Sawadogo, 2015). Thus, the floury character facilitates chewing and would be well suited for this mode of consumption. However, sorghum grains are used in the preparation of several local dishes. Thus, the white color and glassy appearance of the grains would be better suited to these uses. Indeed, Zongo (1991) and Barro-Kondombo (2010) have reported that white grain sorghum varieties are well suited to common dishes compared to red grain varieties that are more suitable for lean season and local beer. As for the sweet sorghum, it is cultivated mainly for the stem, hence the succulence of the stem of all the genotypes evaluated compared to the two grain sorghums (sweet grain sorghum, grain sorghum) whose stems are not juicy. In addition, racial classification could also be a criterion for distinguishing the different types of sorghum grown in Burkina. Indeed, the results showed a predominance of the guinea race in grain sorghum, the caudatum race in sweet grain sorghum and a more diversified racial composition in sweet sorghum (bicolor (40%), caudatum (30%), guinea-bicolor (20%), durra (10%)). The predominance of the guinea race in grain sorghum could be explained by Burkina Faso’s biogeographic location at the heart of the breed’s center of diversification, and also by the fact that the agronomic characteristics and technological qualities of their grains are perfectly suited to the food habits and preferences of rural populations (Zongo, 1991; Barro-Kondombo, 2010). As for sweet grain sorghum, the predominance of the caudatum race could be related to its exploitation as a food sorghum (Sawadogo et al., 2017). The racial diversity in sweet sorghum would be due to the fact that producers are more interested in the stalk than the grains.