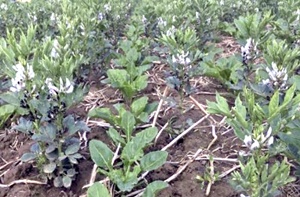 A field experiment was carried out at Ismailia Agricultural Research Station, Agricultural Research Center, Ismailia governorate (Lat. 30° 35' 30" N, Long. 32° 14' 50" E, 10 m a.s.l.), Egypt, during 2018/2019 and 2019/2020 growing seasons to determine the suitable rate of potassium silicate that could mitigate the effect of irrigation water deficiency on productivity of both faba bean and sugar beet under intercropping system. Three irrigation treatments (I1 (120% ETo), I2 (100% ETo) and I3 (80% ETo)) and three rates of sprayed potassium silicate (Si0 unsprayed-control), Si1 (200 ppm) and Si2 (300 ppm)) were used. The results showed the highest intercropped faba bean and sugar beet yields and their components were attained under spraying with Si1 under the three irrigation treatments in both growing seasons. Furthermore, spraying intercropped faba bean and sugar beet with Si1 under I2 and I3 relieved water deficiency and increased the yields, compared to no spraying. The 2-year average values of applied irrigation water to sugar beet intercropping system were 9252, 7730, 6184 m3/ha under I1, I2 and I3, respectively. Using cereal units analysis revealed that the highest values WUE and WP were found under application of I3, namely 0.29 CU/mm and 0.36 CU/mm for WUE and 0.24 CU/mm and 0.25 CU/mm for WP in the first and second seasons, respectively. The highest values of WER were 1.41 and 1.42 obtained from the interaction between irrigation with I2 and spraying with Si1 in the first and second season, respectively. Thus, it could be concluded that to mitigate the effect of irrigation deficiency applied to faba bean intercropped with sugar beet, spraying with 200 ppm of potassium silicate should be applied.

To assess the effectiveness of the application of different amounts of irrigation water, two measurements can be used, namely water use efficiency and water productivity. Water use efficiency serves as a key variable in the assessment of plant responses to water stress induced by deficit irrigation (Chai et al., 2016). It describes the intrinsic trade-off between carbon fixation and water loss, because water evaporates whenever stomata opens for CO2 acquisition for photosynthesis (Bramley et al., 2013). In plant research, water use efficiency is defined as crop yield per unit of water used (Chai et al., 2014). Feleafel and Mirdad (2014) reported that water use efficiency is probably results from its role in advancing root development and penetration, which increases the ability of plants to absorb water from the soil. Whereas, water productivity is a quantitative term used to define the relationship between crop produced and the amount of water involved in crop production (Igbadun et al., 2006). Valipour (2014) defined water productivity as the ratio of yield or marketable product to water used by the crop. Under limited water supplies, the farmer’s goal should be to maximize net income per unit water used rather than per unit land (Fereres and Soriano, 2007). Water productivity increases under deficit irrigation, relative to its value under full irrigation (Fan et al., 2005). It is necessary for irrigation management in the areas suffers from water scarcity to shift from emphasizing production per unit area towards maximizing the production per unit of water consumed, which is “water productivity” (Rekaby et al., 2016).

Intercropping is one of the techniques that can be used to increase land utilization and improve production (Bhattanagar et al., 2007), as well as increase water productivity (Mao et al., 2012). Yield advantages is the most common motive to adopt intercropping systems, which lead to greater resource depletion by intercrops, compared to monocultures (Hauggaard-Nielsen et al., 2006). When the co-crops in an intercropping system having different requirements of the available resources, namely quantity, quality, and time of demand, the advantages of intercropping system could be more apparent (Alfa and Musa, 2015). The efficiency of the intercropping directly depends on proper management of the factors of production (Porto et al., 2011), which bring ecological and economic benefits and consequently increase production, as compared to monoculture (Batista et al., 2016). Water utilization is increased under intercropping systems, where the applied amount of irrigation water to the main crop is used to irrigate both intercrops and that reduces water runoff and soil loss (Lithourgidis, 2011).

In spite of all the research work done on the application of potassium silicate in Egypt, no work was done on its application on faba bean intercropped with sugar beet under irrigation water deficiency. Thus, the objectives of this study were to find the suitable rate of potassium silicate that could mitigate the effect of irrigation water deficiency on productivity of both faba bean and sugar beet under intercropping system and its effect on water utilization by the intercropping system.

Disturbed and undisturbed soil samples from the surface 60 cm at the experimental site were collected for the analysis of main physical, hydro-physical and chemical soil properties. The analyses of the soil samples collected before sowing from the experimental site were conducted by the standard method of Tan (1996) and Page et al. (1982). The obtained values are presented in Tables 2 and 3.

The experiment was carried out in sandy soil and it was arranged in a split plot design with three replicates. Three applied irrigation water treatments (I1, 120% ETo; I2, 100% ETo; I3, 80% ETo) were assigned to the main plots, while three rates of potassium silicate (Si0, unsprayed (control); Si1, spraying 200 ppm; and Si2, spraying 300 ppm) were arranged in the sub plots. The area of the experimental plot was 14.4 m2. The sub-plot consisted of 4 ridges (3 m long and 1.2 m width).

Peanut was the previous summer crop in both seasons. Sugar beet (cultivar Sauther) was sown on the 1st and 5th of November 2018 and 2019, respectively and harvested on the 5th and 6th of May 2019 and 2020, respectively in both solid and intercropped culture. Whereas, faba bean (cultivar 843) was sown on October 15th and 17th in 2018 and 2019, respectively and harvested on April 10th and 13th in 2019 and 2020, respectively. Faba bean seeds were inoculated with Rhizobium leguminosarum before sowing and Arabic gum was used as a sticking agent in both solid and intercropping culture.

Sprinkler system was used to irrigate the experiment. A solid-set sprinkler irrigation system with rotary RC 160 sprinklers of 0.40 to 1.12 an average 0.58 m³/hour discharge rate at 2.80 bars nozzle pressure was used to irrigate the crops. The sprinkler system consists of main PVC pipe line (160 mm diameter), sub main PVC pipelines (110 mm diameter), and PVC lateral lines (50 mm diameter). The laterals were spaced at 10 x 10 meters apart. Application of the irrigation water treatments started after 30 and 15 days from sowing sugar beet and faba bean, respectively. The solid culture of both crops was irrigated using the I1 (120% ETo) irrigation treatment only.

Other regular agronomic practices were done according to the technical recommendations of both crops. At harvest, ten individual plants of faba bean and sugar beet were taken from each experimental plot. The collected data for faba been were number of branches/plant, number of pods/plant and seed yield (ton/ha). For sugar beet, roots of ten plants were taken from the plot to measure root length (cm), and the plants of whole plot were separated into tops and roots and weighted, then converted to estimate roots and tops yield per hectare.

To determine the quality traits of sugar beet, samples of 26 g fresh root weight were taken from each treatment to determine total soluble solids percentage (TSS %) measured by refractometer according to AOAC (1990). Sucrose (%) was estimated according to methods described by Le-Docte (1927). Sugar yield per hectare was calculated according to the following equation:

The amounts of applied irrigation water were calculated according to the equation given by Vermeiren and Jopling (1984) as follows:

LR = leaching requirements. The LR was not considered because the ECe of the soil profile is very low.

To calculate water use efficiency and water productivity for the studied intercropping system, calculation of Cereal Units (CU) (Brockhaus, 1962) was done, then it was added together to obtain one value to represent the total yield from the two crops in the intercropping system. The CU has been used as a common denominator in German agricultural statistics for decades and it were mainly based on the nutritional value. Brankatschk and Finkbeiner, (2014) stated that CU is an appropriate unit for the description of agricultural products. Furthermore, Macak et al., (2015) used CU to evaluate productivity of different crop rotations. This methodology is widely used in Egypt to evaluate the production of different intercropping systems. Abou Keriasha et al., (2013) reported that according to Brockhaus (1962), 100 kg of faba been is equal to 1.20 CU. Furthermore, 100 kg of sugar beet is equal to 0.25 CU. Thus, water use efficiency and water productivity (CU mm-1) was calculated using the accumulated values of cereal units as numerator and the applied water in millimeters as dominator.

According to Stan hill (1986), water use efficiency can be calculated as follows:

Thus, to calculate WUE of the intercropping system, it was changed to CU and the following equation was used:

Similarly, according to the equation presented by Zhang (2003), crop water productivity can be calculated as followed:

Thus, to calculate WP of the intercropping system, it was changed to CU and the following equation was used:

Water equivalent ratio is used to quantify the efficiency of water use by an intercropping system (Mao et al., 2012). The WER is defined as the total water needed in sole crops to produce the equivalent amount of the species yields on a unit area of intercrop as follows:

Data were statistically analyzed using the MSTAT-C Statistical Software Package (Freed,1991). The treatment means were compared using the Least Significant Differences (LSD) test with a significance level of 5% according to Gomez and Gomez (1984). The values of solid faba been and sugar beet yield were not included in the analysis.

The results in Table 4 indicated that all faba bean yield and its attributes were significantly affected by irrigation amounts and potassium silicate rates in both growing seasons. Different trends were observed for the interaction between irrigation and potassium silicate treatments, where seed yield only was found significantly affected in the first season. In the second season, only number of branches/plant was found significantly affected. The results also showed that the highest faba bean yield was obtained under I1 and spraying with 200 ppm potassium silicate, which increased faba yield components, more than the unsprayed plants and plants sprayed with 300 ppm. Results in Table (4) also showed that the highest values of yield and its components were obtained when I1 was applied. Furthermore, application of Si2 resulted in the highest values of yield and its components. Whereas, the interaction effect between I1 and Si2 attained the highest yield and its components of faba bean.

The results in Table 5 indicated that there were significant effects of irrigation and potassium silicate rates and their interaction on all sugar beet traits in both growing seasons, except root length in the second growing season. Furthermore, the highest sugar beet yield was obtained under application of I1 and spraying with 200 ppm potassium silicate. This result could be explained by the suggestions of some studies that silicon could be used as a growth regulator (Eneji et al., 2008).The table also showed that application of I2 increased sugar beet yield losses under spraying with potassium silicate.

Results in Table 9 indicated that highest values of WER for faba bean, sugar beet and total WER were obtained under spraying with 200 ppm potassium silicate for the three irrigation treatments, compared to the other potassium silicate treatments in both growing seasons. However, the highest total WER of 1.41 and 1.42 were obtained from the interaction between irrigation with I2 and spraying with Si1 in the first and second season, respectively. This result showed that the water utilization of this intercropping system, represented by total WER was increased by 41 and 42%.The lowest value of total WER was obtained under I3 in both growing season. Similar results were obtained by El-Mehy et al. (2020) and Abdallah et al. (2021).

Sepaskhah A.R., Ghahraman B. (2004). The effects of irrigation efficiency and uniformity coefficient on relative yield and profit for deficit irrigation. Biosystems Engineering, 87:495-507.