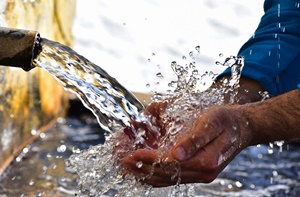 Resilience is an essential key of the assessment of water resources system management. Adequate description of the resilience of water resource systems needs to consider the emergent properties arising from the interaction of the component subsystems. This paper presents an approach to assess resilience in an agricultural water supply system. The system is contextualized as a meta-system composed of three subsystems; the natural catchment and reservoirs, the water distribution infrastructure and agricultural users. The proposed approach allows studying each sub-system separately to determine its properties, quantify the interdependencies between the subsystems and integrate pressures that affect the operation of each sub-system and, consequently, the system in its entirety. This work is a first step in assessing agricultural water resources' resilience under climatic and anthropogenic pressures in agricultural water resources system.

Climate change will significantly impact agriculture in irrigated and rainfed areas across the globe (Lamboll et al., 2017; Shankar and Shikha, 2018). Increasing demand for water, limiting crop productivity and reducing water availability are the consequences of climate change (Ayanlade et al., 2018; Faramarzi et al., 2013). Population growth will increase water demand. Besides, urbanization and intensive agriculture are major sources of pollution of water resources. An in-depth understanding of the impact of climate change and population growth on the resilience of the water supply is essential to support sustainable decision-making (McNeill et al., 2017).

Reservoirs play a crucial role in securing water in regions suffering from water scarcity. Many regions rely entirely on reservoirs for water supply, particularly where groundwater resources are limited, climate variability is high and alternative sources of water are not available (Mereu et al., 2016). Climate change and increasing water demand are major challenges in these reservoirs’ management and resilience (Zhang et al., 2017; Zhao et al., 2018). A better understanding of the impacts of these pressures on the water balance of the reservoirs is necessary.

An agricultural water supply system is complex. It consists of a supply catchment and storage reservoir, a distribution system and agricultural users, ranging from socio-ecological to technical domains. Due to the complexity of the agricultural water system and the multiple interactions among its components, different management approaches need to be applied to ensure a reliable supply. The system needs to be highly resilient to withstand the pressures of climate change and population growth.

Assessment of water supply system performance needs indicators that provide pertinent information on system performance. Resilience is increasingly recognized as a key system property of underpinning sustainability (Blackmore and Plant, 2008) but transforming the concept of resilience into an operational tool for policy and management purposes is a challenge (Klein et al., 2003).

Resilience as a management concept was explored by Amarasinghe et al., (2012) and Barnes et al., (2012) for application in the potable water supply in Southeast Queensland, an area with one of Australia’s most significant urban growth rates. They explored an approach to modeling surrogates of resilience as related families of disaggregated models and considering the viability of these models as decision support aids in managing the complex interaction between components inherent in a potable water supply system.

This paper seeks to examine the hypothesis that resilience is an essential management strategy in agricultural water supply management. The approach proposed here, adapted from Amarasinghe et al., (2012) and Barnes et al., (2012), aims to study a system of agricultural water supply as a system of systems. The work aims to identify dependencies and interconnection between system components and then disaggregate these relationships to define parameters that describe the behavior of the system. These parameters can be developed as indicators describing the resilience.

The Moroccan context and the water resources system of Ouergha

Morocco, like many other developing countries, is strongly impacted by climate change. Water resources are characterized by scarcity and irregularity. They are subject to increasing pressure linked to population growth, to development of irrigated agriculture as well as to urban, industrial and tourism development. Climate change impacts and increasing water demand, would make meeting the water needs more complex (Schilling et al., 2012; Seif-Ennasr et al., 2016). Studies of the evolution of climatic factors have demonstrated an increase in temperatures and an accentuation of climatic variability, mainly characterized by a change in the intensity and distribution of rainfall, a reduction in water resources and an amplification of extreme events (El Jihad et al., 2014; Khattabi et al., 2014; Stour and Agoumi, 2008; Tramblay et al., 2012).

The Moroccan economy will suffer from this situation because it is closely dependent on the abundance of rainfall, as highlighted by the strong dependence between GDP and agricultural GDP. Climate change is affecting the economic development of many sectors, mainly agriculture.

Given these constraints, the development of water resources has always been a central concern of the country’s economic policies, particularly because of their strategic role in developing irrigated agriculture and the country’s water and food security. Since the beginning of the 1960s, Morocco had adopted a strategy that provided the country with extensive hydraulic infrastructure and ensured water needs (drinking water, flood protection, and agricultural production).

The Ouergha basin (7200 Km2 upstream of the M’jaara hydrometric station) regulates almost a third of Morocco’s surface water resources (Senoussi et al., 1999). It feeds the Al Wahda dam, the largest reservoir in the country and the second-largest in Africa in terms of storage capacity with 3.7 billion m3. Rainfall can reach 1800 mm/year in mountainous areas; the country’s wettest areas. The bedrock of the basin is impermeable (clay and marl) preventing infiltration and development of groundwater resources (Boukrim et al., 2011; Senoussi et al., 1999).

Boukrim’s work on the impact study of climate change showed an annual warming of 0.15oC and a rainfall deficit of about 4 mm observed from 1982/1983 to 2007/2008 which is the basin’s driest period (Boukrim et al., 2011). As a result of the increase in temperature, more evaporation reduced flow into rivers and the active storage volume of reservoirs. Senoussi et al., (1999) assessed the potential impacts of global warming in the case of a doubling of the atmospheric CO2 concentration on freshwater potential at the Al Wahda Dam. The results obtained indicate a decrease in annual runoff at this basin reaching 8% by 2050. This is a significant deficit in a country where the resource is particularly scarce.

Measuring the resilience of a WRS is an important consideration in the management of water resources system (Li and Lence, 2007). Traditional water management approaches have failed to achieve sustainable results as they have treated social systems and ecosystems as distinct systems (Bohensky, 2006). WRS cannot be sustained by maintaining the individual components making up the system (Liu et al., 2012). WRS as social-ecological systems acts as a strongly coupled, complex and evolving integrated systems (Cofie and Amede, 2015).

Other definitions of water supply systems’ resilience are found in the literature (Kjeldsen and Rosbjerg, 2004; Wang and Blackmore, 2009). Most of these definitions are focused on quantifying general resilience. The system’s specific resilience to a particular type of pressures such as climate change or population growth was not considered. Specified resilience – resilience “of what to what” is more concrete and amenable to assessment in contrast to general resilience (Carpenter et al., 2001). Most of these definitions used one parameter for quantifying resilience. As a Meta system, considering only one parameter to assess the resilience is difficult (Amarasinghe et al., 2012). These definitions may be helpful in the context of traditional reservoir management but not for a complex system of subsystems. The development of an effective resilience assessment methodology is a major challenge because of the complexity of the water supply system and the different types of pressures that can affect the system (Haimes, 2012).

As a system of systems

Climate change and population growth are two major sources of pressure on the agricultural water supply system. They have a significant impact on the quality and quantity of water in the reservoir storage.

The approach presented here is exploratory. It is based on a in-depth conceptual understanding of the agricultural water supply infrastructure. In developing the first expression, the system’s three components have been considered and examined from upstream to downstream.

I: All inflows into the system 1 (Surface runoff, groundwater flow, diversions, transfers and others. In Ouergha context, it consists mainly of surface runoff),

O: All outflows from the system 1 (Domestic demand, environmental flows and others),

ΣL: Summation of all losses (Percolation, evapotranspiration, leakage or other accounted losses and reservoir overflows during high rainfall),

ΣL: Summation of all losses in system 2 (Evaporation, leakage and overflow of the irrigation channels),

The initial conceptual model is decomposed into a series of cascading empirical models of reducing complexity. The proposed approach will allow studying each subsystem separately to determine its properties, quantify the interdependencies between the subsystems, integrate the climatic and anthropic pressures that affect the operation of each sub-system, and consequently the system in its entirety.