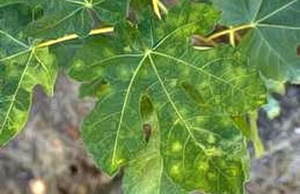 Fig (Ficus carica L.), widely grown in Morocco, is an important fruit crop for the country, both economically and socially. Fig mosaic disease is a complex with which at least eight viruses of different taxonomic position are associated. In 2014-2018, field surveys for viruses were carried out in the main fig growing areas of Morocco (Azilal, El Jadida, Moulay Driss Zarhoune and Taounate). A total of 117 samples were collected and checked by reverse transcription polymerase chain reaction (RT-PCR), using virus specific primers, for the presence of Fig mosaic virus (FMV), Fig leaf mottle-associated virus 1 (FLMaV-1), Fig leaf mottle-associated virus 2 (FLMaV-2), Fig mild mottling-associated virus (FMMaV), Fig latent virus 1 (FLV-1), Fig fleck-associated virus (FFkaV) and Fig cryptic virus (FCrV). PCR was also carried out for the presence of Fig badnavirus 1 (FBaV-1). About 71% of the trees were infected with at least one virus, with mixed infections in ca. 50% of the samples. FMV was the prevailing virus (40.9% infection), especially in Azilal (47.4%) and on cv. Nabout (46.2%), followed by FLMaV-1 (30.7%). FMMaV-2, FMMaV, FFkaV and FBV-1 were detected in 25.2%, 25.2%, 8.7% and 5.5% of the samples, respectively. FLV-1 and FCrV were not found. This is the first report on the presence of FMV, FLMaV-1, FLMaV-2, FMMaV, FFkaV and FBV-1 in Morocco and offers a preliminary insight into the unsatisfactory health status of fig trees in the country. Considering that the production of figs in Morocco is increasing, more attention should be given to improving the phytosanitary condition of fig trees in the country.

The common fig (Ficus carica L.) is a temperate species native to South‐west Asia and Eastern Mediterranean region. It is widely cultivated throughout Morocco, mainly as individual trees in gardens and orchards for family consumption and only rarely as specialized crops, where fruits are used for fresh and dried consumption. The total Moroccan fig cultivated area is ca. 55,000 ha, with an estimated total production of 127,000 tonnes (Anonymous, 2017). Local cultivars, whose denominations often indicate the local geographic origin, the color of the fruits or their maturation period, are numerous and well adapted to agro-ecological Moroccan conditions, among which the most important are El Messari or Homrame or Johri, Lembdar Labied, Lembdar Lekhel, Rhoudane, El Koté and Aounq Hmam. The most important fig production areas are Taounate, Chefchaouen, Al Hoceima, Ouazzane and Tetouan.

Fig is affected to a very large extent by a disease known as “mosaic” (Fig mosaic disease, FMD), which is a serious pathological constraint of fig production. FMD remains one of the most serious pathological problem facing fig germplasm exchange and production. This disease, first reported from California (Condit and Horne, 1933), is now known to have a worldwide distribution, likely being present in all countries were fig is grown (Blodgett and Gömec, 1967; Martelli et al. 1993). FMD is a graft transmissible disease (Condit and Horne, 1933) vectored by the eriophyid mite Aceria ficus (Flock and Wallace, 1955; Slykhuis, 1973). Although no estimates of the economic impact of FMD are available, the notion that severely affected trees are less productive than those with milder symptoms and suffer premature fruit abscission has been taken as an indication that FMD can have a detrimental effect on the crop (Chiumenti et al., 2013). FMD is a complex disorder (Martelli, 2011) with which eight viruses of different taxonomic position are associated (Table 1). Fig mosaic virus (FMV) is the agent that occurs in symptomatic plants more often than any of the other fig-infecting RNA viruses and is the major incitant of mosaic (Chiumenti et al., 2013). The role in symptom induction of other viruses, such as the putative closterovirids Fig leaf mottle-associated virus 1 (FLMaV-1), Fig leaf mottle-associated virus 2 (FLMaV-2), Fig mild mottle-associated virus (FMMaV) (Elbeaino et al., 2006, 2007, 2010) and the putative marafivirus Fig fleck-associated virus (FFkaV) (Elbeaino et al., 2011a), has not been ascertained. None of the aforementioned viruses is transmitted through seeds, contrarily to Fig latent virus 1 (FLV-1) (Gattoni et al., 2009) and Fig badnavirus 1 (FBV-1), the only DNA virus identified in fig so far (Laney et al., 2012; Minafra et al., 2012), both of which are vertically transmitted to seedlings, in which they do not induce symptoms. Two other closteroviruses, Arkansas fig closterovirus 1 and 2 (AFCV-1 and -2), and the badnavirus FBV-1 were also reported in Arkansas (Tzanetakis and Martin, 2010) with evidence that FBV-1 is a DNA virus that is integrated in the fig genome (Laney et al., 2012).

Foliar discolorations (chlorotic mottling, blotching and banding, clearing and feathering of the veins, chlorotic and necrotic ringspots and line patterns) and malformation resembling those typical of fig mosaic disease (Martelli, 2011) had been repeatedly observed in Moroccan fig orchards. However, no information is currently available on the possible causal agents. Accordingly, the main objective of the present study was to investigate and evaluate the incidence and distribution in Moroccan fig orchards of the following viruses: FMV, FLMaV-1, FLMaV-2, FMMaV, FLV-1, FFkaV and FCrV and FBV-1.

During 2014-2018, field surveys were carried out in 32 commercial fig plantations located in four Moroccan regions: Azilal, El Jadida, Moulay Driss Zarhoune and Taounate. Samples were representative of the most common local fig varieties grown in Morocco, i.e. Aounq, Boustati, Elquoti Lebied, El Messari, Embar Lekhel, Chetoui, Jeblia, Lembdar Lebied, Lembdar Lekhel, M’tioui, Nabout and Rhoudane. In total, 127 samples were randomly collected from symptomatic (71 samples) and symptomless (56 samples) fig trees. Selection of orchards and collection of samples was done according to the prevalence of the cultivars and their geographical distribution. Samples consisting of leaves and cuttings of about 30 cm in length were collected from one- to two-year-old shoots from the quadrant of the tree canopy and stored in plastic bags at 4°C until use for laboratory assays.

Fig mosaic symptoms were observed in most of the surveyed fields, on young and old leaves, especially during spring and autumn. Trees showed a wide array of leaf discolorations, i.e. chlorotic to yellowish mottling and blotching, mosaic spots, vein clearing and feathering, chlorotic and necrotic ringspots. Leaf malformations were also encountered during the surveys and were associated with discolorations and chlorotic mottling with a contrast ranged from yellow to green color.

Interestingly, at least one tree of each of the surveyed 12 cultivars did not show visible symptoms at the time of the survey and did not contain any of the eight viruses. These plants, after a confirmatory round of additional assays, may represent potential sources of material for propagation in the framework of a sanitary improvement programme, which has been already established since 2013 in Morocco.

Fig mosaic disease induces the major threat to the fig crop and may constitute a limiting factor for its growing. The present study expands the knowledge on the sanitary status of fig trees in Morocco and provides further information about the virus incidence and distribution within the country. The results have shown a much deteriorated sanitary status of the fig crop in Morocco (71.6% of viral infections). All the tested fig‐infecting viruses were present in the surveyed cultivars with the exception of FCrV and FLV‐1. These results are not surprising considering the mode of propagation of this species (by rooted cuttings and grafting) and the presence of very efficient virus vectors (eriophyid mites, mealybugs and aphids), both factors that favour the transmission of viral agents in nature. The knowledge gained in recent years on virus diseases of fig can finally allow initiating the sanitary selection and sanitation of propagating material.

Elbeaino T., Digiaro M., De Stradis A. and Martelli G.P. (2007). Identification of a second member of the family Closteroviridae in mosaic-diseased figs. Journal of Plant Pathology 89: 199-124.

Minafra A. and Hadidi A. (1994). Sensitive detection of Grapevine virus A, B and leafroll-associated virus III from viruliferous mealybugs and infected tissues by cDNA amplification. Journal of Virological Methods 47: 175-187.