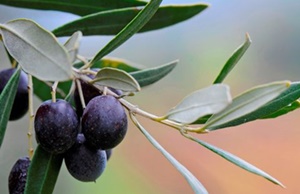 Preliminary evaluation of the status of olive-infecting viruses in Morocco

Olive is one of the most ancient and important fruit tree crops in Morocco. Olive trees are affected by at least 15 viruses belonging to eight genera. Most of these viruses were isolated from symptomless trees and/or reported in a very limited number of trees. In order to check for the presence of olive-infecting viruses in Morocco, a preliminary survey was conducted during March-April 2014 and a total of 105 samples (cv. Picholine marocaine) were randomly collected from 15 commercial orchards located in three important olive-growing regions: Béni Mellal, Marrakech and Meknès. Samples were tested by RT-PCR, using specific primers, to search for the presence of eight olive viruses: Olive latent virus 1 (OLV-1), Olive latent virus 2 (OLV-2), Strawberry latent ringspot virus (SLRSV), Cucumber mosaic virus (CMV), Arabis mosaic virus (ArMV), Cherry leaf roll virus (CLRV), Olive latent ringspot virus (OLRSV) and Olive leaf yellowing-associated virus (OLYaV). About one third (34.3%) of the trees were infected. In particular, the closterovirus OLYaV was the most widespread, as it was detected in 16.2% of the samples, followed by the necrovirus OLV-1 (8.6%), the oleavirus OLV-2 (3.8%), the cucumovirus CMV (2.8%), the sadwavirus SLRV (1.9%), and the nepovirus ArMV (0.9%). The fact that these infections are mostly latent and the increasing of national demand for propagation material of high sanitary standard call for the implementation of a cleanup using both heat therapy and in vitro propagation for the establishment of olive foundation blocks.

Olive (Olea europaea L.) is a major and economically important crop in Morocco, where it is grown on an area of about 1.008.400 Ha with a total production of 1.416.110 tons per year (Anonymous, 2016). Almost 75% of the olives produced in Morocco go for olive oil. Morocco’s principal regions for olive production are Meknes, Fez, Béni Mellal and Marrakech. The olives grown in Morocco mainly belong to the ‘Picholine marocaine’ population variety, which is widely distributed throughout the country for over 96% of the country’s olive assets. The remaining 4% is made up of the ‘Picholine du Languedoc’, ‘Dahbia’, ‘Menara’ and ‘Meslala’ varieties and some Spanish and Italian varieties such as ‘Picual’, ‘Manzanilla’, ‘Arbequina’, ‘Gordal’ and ‘Frantoio’.

Like other vegetatively propagated crops, olive is affected by a number of infectious agents, including at least 15 viruses (Martelli 1999; Felix and Clara 2002; Cardoso et al., 2004; Al Abdullah et al., 2010) that are primarily disseminated with plants for planting. Some of these are agents of identified diseases, others cause latent infections whose effects on the host have yet to be determined.

Given the lack of information on the sanitary status of the Moroccan olive industry, preliminary investigations have been undertaken to assess the plant health status in the regions of Béni Mellal, Marrakech and Meknès, the results of which are reported in the present paper.

Because of the great importance of olive cultivation in Morocco, a survey of the phytosanitary status of olive trees was carried out during March-April 2014 and a total of 105 samples were collected from 15 commercial orchards located in three important olive-growing regions: Béni Mellal, Marrakech and Meknès. As far as we know, this was the first analysis that focused on the presence of olive viruses in Morocco. Our study focussed only on the ‘Picholine marocaine’, the most important cultivar in Morocco. Cuttings of about 20-30 cm in length were collected from 1- or 2-year-old twigs from the quadrant of each tree. Samples were labelled, stored in plastic bags and kept at 4°C. Total RNA extraction was performed starting from 0.1 g of tissue per sample and using RNeasy Plant Mini Kit (Qiagen GmbH, Hilden, Germany), following the manufacturer’s protocol. Samples were tested by RT-PCR, following amplification conditions detailed by El Air et al. (2011), to search for the presence of eight olive viruses: Olive latent virus 1 (OLV-1), Olive latent virus 2 (OLV-2), Strawberry latent ringspot virus (SLRSV), Cucumber mosaic virus (CMV), Arabis mosaic virus (ArMV), Cherry leaf roll virus (CLRV), Olive latent ringspot virus (OLRSV) and Olive leaf yellowing-associated virus (OLYaV), by using virus specific primers (Table 1). Amplified products were analyzed by electrophoresis in 1.5% agarose gel and stained with ethidium bromide.

During the surveys, no distinctive symptoms of viral infections were observed, although a certain number of encountered trees were stunted, or had bushy vegetation or showed chlorosis or yellowing of the leaves, deformation, shortening of the internodes, and flattening of branches.

The relative frequencies of the different viruses infecting olive trees are reported in Table 2. Of the 105 collected samples, 36 were infected by at least one virus, which represents an infection rate of 34.3%. Single infections accounted for 24.8% (26/105) of the samples collected from plants. Mixed virus infections were common involving two (6.7%) or three viruses (2.8%) in various combinations. No plant was found to be infected by more than three of the studied viruses in this survey. Results showed the highest incidence for OLYaV (16.2%), followed by OLV-1 (8.6%), OLV-2 (3.8%) and CMV (2.8%) among the collected samples. SLRSV and ArMV were detected in 1.9 and 0.9% of the samples, respectively. The high percentage of OLYaV infection in Morocco could be explained by possible transmission by olive psylla Euphyllura olivine (Costa) and unidentified mealybugs of genus Pseudococcus (Sabanazdovic et al., 1999). The presence of SLRSV, one of the few viruses associated with a true disease of olive (Marte et al., 1986), was revealed in two olive trees, one from Béni Mellal and the other from Marrakech region. By contrast, ArMV was detected only in a single tree from Meknès. Though latent in olive, ArMV is a serious pathogen of a number of herbaceous and woody agricultural plant species. Interestingly, CLRV and OLRSV were not detected in the samples analyzed. Marrakech region was the most infected where 40% of the collected samples were infected by at least one virus, followed by Béni Mellal (35.6%) and Meknès (26.7%).

Even though the sanitary evaluation was limited to 105 olive trees for the presence of only 8 viruses, these preliminary results show that all the most important olive-infecting viruses (OLYaV, OLV-1, OLV-2, CMV, SLRSV and ArMV) occur in the country, but their level of infection is, on average, lower than that recorded from other Mediterranean countries (Martelli, 1999; Saponari et al., 2002a; Al Abdullah et al., 2005; Fadel el al., 2005; Faggioli et al., 2005; El Air et al., 2010; Youssef et al., 2010).

A better understanding of the distribution of olive tree viruses will be possible only by increasing our knowledge of their epidemiology (Faggioli et al., 2005). Nematodes are the putative vectors of olive nepoviruses. The possibility of pollen- and seed-transmission for OLV-1 has also been discussed (Saponari et al., 2002b). The field transmission of these viruses, however, appears unlikely because of the low incidence of infections and the occasional and erratic detection of some of these viruses in one or a few infected trees. As with other woody crops, infected propagative material and the use of different methods of propagation (self-rooting, grafting) might well be the main means of virus dissemination (Faggioli et al., 2005).

The above findings, however preliminary as they are, give an insight of the presence and prevalence of olive viruses in Morocco and give useful hints for implementations of preventive measures, such as sanitary selection and sanitation, which are likely to be the only effective strategy to control the dissemination of these pathogens. Sanitary selection based on visual examination is not effective due to the widespread occurrence of latent infections. Laboratory tests are necessary to give full description of the health status of plants. Among different techniques, PCR-based methods have proved to be the most effective for identification and detection of olive viruses. The fact that olive viruses occur often in latent forms, makes it impossible to determine their impact on plant yield. More research is needed to better understand how olive viruses disseminate and how they affect the yield and quality of the final products.