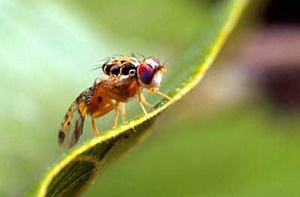 Moulouya Perimeter is one of the most important zones of Citrus production in Morocco, with an area of 22.000 ha and 360.000 tons of Citrus production. Medfly “Ceratitis capitata, Wiedemann 1824” is a pest with an important economic impact for Citrus, because of its impact on yield losses and phytosanitary concern linked to its presence. In Citrus orchards of Moulouya perimeter, adjacent wild jujube (Ziziphus lotus and Ziziphus jujuba) trees may have an impact on Medfly populations. The main objective of this study is to evaluate the influence of adjacent jujube trees, growing in windbreaks and noncommercial orchards, on medfly captures in the traps located in citrus orchards and to determine the amount of increase of punctured fruits caused by medfly oviposition considering the distance ranges to the jujube trees (10, 25, 50, 75, 100, 125, 150, 175, 200, 225, 250 and 275m).To achieve this purpose, 180 traps were placed in 15 orchards and monitored for medfly captures weekly, from April to November 2019, within three locations (Aklim, Chouihia, and Reggada) representing Citrus producing area of Moulouya Perimeter. The monitoring of C. capitata adults was conducted using “Maghreb med” traps with trimedlure (tbutyl-4(or5)-chloro-2-methyl-cyclohexane carboxylate) male-specific para-pheromone as attractant and dichlorvos as a toxicant. Five orchards per each location were selected and 12 traps were hung in every orchard in fixed distances from the jujube trees and fruits were checked for punctures. The influence of each jujube tree in citrus orchards in his vicinity is higher within distances inferior to 75 m. Then, its impact could approach 2,25 Ha on average, and in this area, C. capitata population densities were twice to five times as high as in other distances. Furthermore, Citrus trees located at distances inferior to 75m from the jujube trees showed an increase in the percentage of punctured fruits compared with distances higher than 75m.

The Mediterranean fruit fly (hereafter medfly), Ceratitis capitata (Wiedemann) (Diptera: Tephritidae) is one of the most devastative insect pests of fruit and vegetables worldwide (Papadopoulos et al., 2001). Adult females of medfly lay eggs in ripe or ripening fruits and larvae feed by destroying the fruit mesocarp (pulp, flesh). Certain studies pointed out that the presence of jujube, patches or trees, in cropped lands constitutes a refuge for several crops pests (weeds, mollusk, rodents, Spanish sparrow, insects and bacteria) (Rsaissi et al., 2012). Non-cultivated, isolated jujube trees in windbreaks and adjacent noncommercial orchards are usually present in large numbers in the landscape of citrus crops in the Moulouya perimeter, like in other Mediterranean areas (Roselló i Botey, 2007). Mature jujube fruits are frequently attacked by female medfly causing punctures and serving as multiplication media and origin of new infestations in other cultivated crops like Citrus (Ben yazid et al. 2018). Several studies reported that adjacent host plants to Citrus commercial orchards are a reservoir of infestation of those orchards (Israely et al., 1997; Alemany et al., 2004; Martínez-Ferrer et al., 2006). Because of the high risk of infestation, certain authors recommend considering the control of C.capitata in them (Muñoz and Cardeñoso Herrero, 2006). The main objective of this study is to check the influence of adjacent jujube trees on C.capitata captures and fruit damage in citrus orchards considering the ranges of distances between citrus trees and traps from the jujube trees.

The study was carried out in three sites in the citrus producing area of Moulouya Perimeter, in northeast Morocco, from May to November 2019 (Figure 1). Five orchards per location (Aklim, Chouihia, and Reggada) commercial clementine (Citrus clementina) orchards, with adult trees, were selected for the survey (the criteria of selection were jujube trees presence in vicinity and the presence of clementine trees) (Figure 1). Selected orchards were representing the total Citrus growing area. The monitoring of C. capitata adults flies was based on “Maghreb med” traps with trimedlure (tbutyl-4(or5)-chloro-2-methyl-cyclohexane carboxylate) male-specific parapheromoun as attractant and dichlorvos (DDVP) as a toxicant agent. To maintain the effectiveness of traps, Trimedlure ships were changed every 8 weeks, and DDVP ships every 6 weeks. In each orchard, 12 traps were placed and set up at 1,5 m above the ground on the sunny side of the tree. The captures of C.capitata were checked in the 180 traps weekly and noted, captured flies were removed from the traps after counting and noting. To avoid interferences, traps were hung at 50 m away from ones each other and in orchards without the presence of other host plants than jujube in hedges.

Captures and punctured fruits in different locations, orchards and traps were synthetized and compared using General Linear Model Univariate (GLM) and means were separated with Post hoc test Schefféa,b with P ≤ 0.05 and 95% confidence intervals (CI). All data statistical analyses were carried out using the SPSS.25 software and Excel Microsoft.

Fluctuations of medfly populations in the study area

Medfly captures occurred, during our study period, since the second week of April and the peak was recorded earlier in September. After the peak, the number of captures started to decrease and attained zero at the end of November (Figure 2). The same results have been reported by Ben yazid et al. in 2020. This fluctuation is linked to climatic conditions and the availability of host plants and ripening fruits in the wild and cultivated fruit trees. The period between late August and early September is a key period for citrus fruits because it corresponds to the ripening stage which is with high sensitivity to medfly punctures (Ben yazid et al., 2018).

The analysis of collected data showed that captures are influenced by the distance of traps from the jujube trees. In three locations (Reggada, Aklim, and chouihia), the pattern of distribution of captures in all traps presented a significant difference (Table 1). The means of medfly captures were 316,1; 371,75 and 423,73 with error standard of 17,106 for Aklim, Chouihia, and Reggada respectively. This result is due to the prevalence of jujube trees in Reggada location and the abundance of the host plant in non-controlled orchards.

Our results (Figure 3) showed that the traps located within a distance of 75 m from a jujube tree captured the highest level of captures in all locations and all orchards. Those traps showed a double to five times increase in total number of flies captured per trap during study period, compared with traps located at other considered distances higher than 75m. This increase in captures was important. All the distance ranges considered between 75m< distances< 275m showed lower captures compared with traps located at ≤ 75m from jujube trees in all orchards and locations . Results may explain that jujube trees are a reservoir of infestations of citrus orchards and that captures in Citrus orchards are significantly linked to the distance between traps and jujube trees present in windbreaks or adjacent noncommercial orchards. The Table 2 showed that traps in distances inferior or equal to 75m from the jujube trees are grouped in a three sub-sets with means of 438,66bcd ; 515,73cd;656,33de; 777,46e flies per trap in 75; 50; 25 and 10 m of distance significantly different to the mean of other sub-sets (257.26 flies per trap) which grouping traps representing all other distances from jujube trees (75<distances<275 with some slight differences inter sub-sets) with means of varying within interval of 146 and 394,93 flies per trap.

Considering the influence of each jujube tree in citrus orchards in his vicinity is higher within distances inferior to 75 m, this impact approaches 2,25 Ha on average and in this area C. capitata population density could be twice to five times as high as in other areas. In Molouya perimeter, the chemical spray decision making, for Medfly control, is piloted only by the threshold of male adults captures in traps hung on citrus trees in orchards. However, medfly captures are linked to the presence of host fruit trees in windbreaks and adjacent hedges surrounding the citrus orchards (mainly jujube trees). Thus, the presence of jujube trees in our study zone and noncommercial orchards surrounding citrus orchards provides a potential breeding area for generations that will later attack Clementine varieties in later September, October, and earlier November. To reduce this effect, it is recommended to remove the host plants adjacent to citrus orchard, integrate them in the control programs. Furthermore its might be useful as “trap tree” for medfly trapping. Our results concord with those obtained for fig trees in Ibiza Island in Spain by Muñoz et al. in 2011 with an average of the impact of 1 Ha and distance of trap from fig tree of 50 m. Martínez-Ferrer et al. (2006) reported the same influence for other host plants adjacent to citrus orchards like peach and apricot trees in Spain.

The percentage of affected Citrus fruits was under 5% in the trees under survey because of intensive management of medfly in the area by the growers. But this percentage still presents high risk of interception of larvae in exported shipments. Data showed that the mean percentage of affected Citrus fruits was under 5% and the rate of punctured fruits was influenced by the distance of the citrus tree surveyed from the jujube trees. In the three locations, the pattern of distribution of punctures in all surveyed trees showed a significant difference between Reggada and Aklim, and between Reggada and Chouihia, but a significant similarity between Aklim and Chouihia (Figure 4). The distribution within each location and orchard is influenced by the distance of the citrus tree from the jujube tree. The results of our study showed an increase in punctured fruit as Citrus trees were close to the jujube trees. Subsets with less than 75m distance from jujube trees showed higher infestation rates compared to subsets with distances longer than 75m with a high significance (Table 3). The mean percentage of punctured fruits, in subsets within distances lower than 75m, was 4 to 8 times higher than mean percentage in other distances.

The fruit punctures trends found in all locations in citrus zone were similar to those reported for other Mediterranean countries or regions, with only relatively minor variations (Muñoz et al., 2011).

Our findings suggest that adjacent non-cultivated jujube trees growing in windbreaks and noncommercial orchards reinforced the increase of medfly captures and contributed to increasing the damage in citrus fruits adjacent to those isolated plants. This result stresses the convenience of including jujube trees in medfly populations control programs, when it is implemented, in citrus orchards located in their vicinity. Also, Jujube trees might be useful as” trap trees “in medfly control programs if they can’t be removed (Martínez-Ferrer et al., 2006). Extending trials are recommended to other host plants present in the vicinity of citrus orchards, mainly pomegranate, loquat, fig, and prickly pear trees.